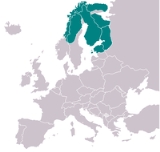 Encyclopedia
The Finno-Lappic languages (also Finno-Saamic, Finno-Samic) are a hypothetical subgroup of the Uralic family
Uralic languages
The Uralic languages constitute a language family of some three dozen languages spoken by approximately 25 million people. The healthiest Uralic languages in terms of the number of native speakers are Hungarian, Finnish, Estonian, Mari and Udmurt...
, and are made up of 22 languages classified into either the Sami languages
Sami languages
Sami or Saami is a general name for a group of Uralic languages spoken by the Sami people in parts of northern Finland, Norway, Sweden and extreme northwestern Russia, in Northern Europe. Sami is frequently and erroneously believed to be a single language. Several names are used for the Sami...
(or Lappic), which are spoken by the Sami people
Sami people
The Sami people, also spelled Sámi, or Saami, are the arctic indigenous people inhabiting Sápmi, which today encompasses parts of far northern Sweden, Norway, Finland, the Kola Peninsula of Russia, and the border area between south and middle Sweden and Norway. The Sámi are Europe’s northernmost...
who inhabit the Sápmi region of northern Fennoscandia
Fennoscandia
Fennoscandia and Fenno-Scandinavia are geographic and geological terms used to describe the Scandinavian Peninsula, the Kola Peninsula, Karelia and Finland...
, or Finnic languages
Finnic languages
The term Finnic languages often means the Baltic-Finnic languages, an undisputed branch of the Uralic languages. However, it is also commonly used to mean the Finno-Permic languages, a hypothetical intermediate branch that includes Baltic Finnic, or the more disputed Finno-Volgaic languages....
, which include the major languages Finnish
Finnish language
Finnish is the language spoken by the majority of the population in Finland Primarily for use by restaurant menus and by ethnic Finns outside Finland. It is one of the two official languages of Finland and an official minority language in Sweden. In Sweden, both standard Finnish and Meänkieli, a...
and Estonian
Estonian language
Estonian is the official language of Estonia, spoken by about 1.1 million people in Estonia and tens of thousands in various émigré communities...
. The grouping is not universally recognized as valid.


Arguments for and against genetical unity

When the hypothetical Finnic-Sami protolanguage (also known as Early Proto-Finnic) is reconstructed, it turns out phonologically nearly identical to the preceding stage, Proto-Finno-Volgaic (which in turn is very close to Proto-Finno-Ugric, and quite close to Proto-Uralic itself as well).

There are a number of noticeable traits common to most Finno-Lappic languages, however none of them unquestionably in favor of a family unity. The first of these is the presence of consonant gradation
Consonant gradation
Consonant gradation is a type of consonant mutation, in which consonants alternate between various "grades". It is found in some Uralic languages such as Finnish, Estonian, Northern Sámi, and the Samoyed language Nganasan. In addition, it has been reconstructed for Proto-Germanic, the parent...
, found in all of the languages except the marginal languages of the group, Livonian
Livonian language
Livonian belongs to the Finnic branch of the Uralic languages. It is a nearly extinct language, with one of its last native speakers having died in February 2009. It is closely related to Estonian...
, Veps
Veps language
The Veps language , spoken by the Vepsians , belongs to the Finnic group of the Uralic languages...
and Southern Sami
Southern Sami
Southern Sami is the southwestern-most of the Sami languages. It is a seriously endangered language; the last strongholds of this language are the municipalities of Snåsa and Hattfjelldal in Norway...
. Gradation is also found in the distantly related Samoyedic Nganasan
Nganasan language
Nganasan language is a language of the Nganasan people...
, and it has been debated if gradation is an original Uralic feature suppressed in all other branches, an independent innovation in Finno-Lappic and Nganasan, or independent in all three of Finnic, Samic and Nganasan. Also, even if gradation in Finnic and Samic is connected, it is disputed whether this represents common inheritance or later contact influence.

The contrastive presence of rounded vowels beyond the first syllable, atypical of Uralic languages in general, is also present in both Finnic and Samic (and again also Samoyedic). This too has been argued to represent later contact influence, on the basis of comparisons such as F. *enoj : S. *eanoj "maternal uncle", where the exclusively Finnic development *aj > *oj appears to have been loaned into Samic. There is also considerable disagreement between the languages (both between the two families, and within them) in whether certain words contain a rounded vowel.

The loss of initial *w before a short rounded vowel has also been proposed as a common innovation, but with counterexamples such as Estonian võtta- "to take" (with *w preserved as its regular reflex /ʋ/ due to the development *o > /ɤ/) suggesting a date postdating not only the split between Finnic and Samic, but also of northern and southern Finnic (cf. Finnish otta-). (A complementary epenthesis of *w before initial long rounded vowels is accepted to not represent common inheritance, as it occurs also before long vowels resulting from the exclusively Samic development *a > *ō. )

For morphological
Morphology (linguistics)
In linguistics, morphology is the identification, analysis and description, in a language, of the structure of morphemes and other linguistic units, such as words, affixes, parts of speech, intonation/stress, or implied context...
features common to Samic and Finnic formerly thought to represent Finno-Lappic innovations, explanations have likewise been offered either of common Uralic inheritance or of independent innovation.
The source of this article is wikipedia, the free encyclopedia.  The text of this article is licensed under the GFDL.