Encyclopedia
Fez is a forthcoming platform game
Platform game
A platform game is a video game characterized by requiring the player to jump to and from suspended platforms or over obstacles . It must be possible to control these jumps and to fall from platforms or miss jumps...
developed by independent software developers Polytron. It was initially announced that the game will come to Xbox Live Arcade in early 2010, but has since then been pushed back to 2011 and eventually 2012. More platforms are being considered.

Fez features 2D/3D perspective shifts in a manner similar to Super Paper Mario
Super Paper Mario
is a platform style console role-playing game developed by Intelligent Systems and published by Nintendo. Originally developed for the Nintendo GameCube, it was released for the Wii in 2007. The style of gameplay is a combination of the previous Paper Mario titles and Super Mario Bros. titles...
and Crush
Crush (video game)
Crush is a platformer-puzzle video game developed by Kuju Entertainment's Zoë Mode studio and published by Sega in 2007 for the PlayStation Portable. Its protagonist is Danny, a teenager suffering from insomnia, who uses an experimental device to explore his mind and discover the cause of his...
. The use of Escher
M. C. Escher
Maurits Cornelis Escher , usually referred to as M. C. Escher , was a Dutch graphic artist. He is known for his often mathematically inspired woodcuts, lithographs, and mezzotints...
-like optical illusions also predominates gameplay in a manner similar to Echochrome
Echochrome
is a puzzle game created by Sony's JAPAN Studio and Game Yarouze, which is available for PlayStation 3 from the PlayStation Store and for PlayStation Portable on either UMD or from the PlayStation Store. Gameplay involves a mannequin figure traversing a rotatable world where physics and reality...
. 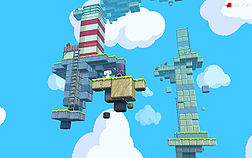