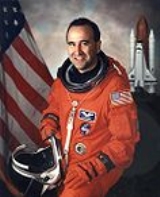 Caldeiro was named a NASA
NASA
The National Aeronautics and Space Administration is the agency of the United States government that is responsible for the nation's civilian space program and for aeronautics and aerospace research...
astronaut on May 1, 1996, as part of Astronaut Group 16
NASA Astronaut Group 16
NASA's Astronaut Group 16 was announced by NASA on 1 May 1996. The class was nicknamed "The Sardines" for being such a large class, humorously implying that their training sessions would be as tightly packed as sardines in a can. These 44 candidates were in fact the largest astronaut class ever...
, nicknamed "The Sardines".

Caldeiro was assigned to high altitude research flights in NASA's WB-57
B-57 Canberra
The Martin B-57 Canberra was a United States-built, twin jet engine light bomber and reconnaissance aircraft, which entered service with the United States Air Force in 1953. The B-57 was initially a version of the English Electric Canberra built under license. However, the Glenn L...
aircraft. In 2002, he was appointed to the President's Advisory Commission on Educational Excellence for Hispanic Americans.