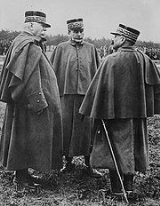 Encyclopedia
Fernand Louis Armand Marie de Langle de Cary (4 July 1849 - 19 February 1927) was a French general during World War I
World War I
World War I , which was predominantly called the World War or the Great War from its occurrence until 1939, and the First World War or World War I thereafter, was a major war centred in Europe that began on 28 July 1914 and lasted until 11 November 1918...
. He commanded Fourth Army when the war began.

de Langle de Cary joined the French Army in 1869, joining the Chasseurs d'Afrique
Chasseurs d'Afrique
The Chasseurs d'Afrique were a light cavalry corps in the French Armée d'Afrique . First raised in the 1830s from regular French cavalry posted to Algeria, they numbered five regiments by World War II...
. He participated in the Franco-Prussian War
Franco-Prussian War
The Franco-Prussian War or Franco-German War, often referred to in France as the 1870 War was a conflict between the Second French Empire and the Kingdom of Prussia. Prussia was aided by the North German Confederation, of which it was a member, and the South German states of Baden, Württemberg and...
, during which he was wounded. After the war he received staff training and served for a time as a professor at the French military academy. He was promoted to general in 1900 and given the command of a cavalry brigade in Algeria, later he was made a member of the Conseil Supérieur de la Guerre.

He commanded the French forces in the Second Battle of Champagne
Second Battle of Champagne
The Second Battle of Champagne was a French offensive against the invading German army beginning on 25 September 1915, part of World War I.-September 25 - October 6:...
the following year, a failed and costly French offensive. Nevertheless he replaced Edouard de Curieres de Castelnau
Noël Édouard, vicomte de Curières de Castelnau
Noël Marie Joseph Édouard, Vicomte de Curières de Castelnau was a French general in World War I, one of the leading proponents of the philosophy of attaque à outrance that dominated French military thinking in the early part of the war.Born in Gascony to a family with a long history of military...
as commander of the Central Army Group in December, 1915, when Castelnau was promoted to Joffre's second-in-command.

The unpreparedness of the defence of Verdun for the German offensive in 1916 led Joffre to remove de Langle de Cary from command. The official reason for him being removed was his age, and he was retired the following year.