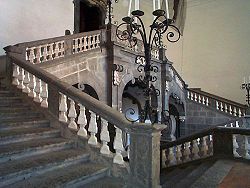 Ferdinando Sanfelice was an Italian late Baroque
Baroque
The Baroque is a period and the style that used exaggerated motion and clear, easily interpreted detail to produce drama, tension, exuberance, and grandeur in sculpture, painting, literature, dance, and music...
architect and painter.

Sanfelice was known primarily for temporary displays and his secular architecture. The former involved displays such as those set up for royal visits and births as well as for religious celebrations; the latter included a large number of family dwellings in Naples, including his own Palazzo Sanfelice, built between 1723 and 1728, and the Palazzo Serra di Cassano
Palazzo Serra di Cassano
Palazzo Serra di Cassano is a building in Naples, Italy, built for the wealthy Serra Family, one of the original 54 families of the 'old nobility' of Genoa, whose family was organized within an Albergo . The family insignia is frescoed on the ceiling of the Palazzo Serra's Great Hall...
, finished around 1730. Most notable in Sanfelice's architecture are the staircases; rather than being incidental features set off to the side of a courtyard, he gave them central and prominent positions so that they became important architectural features in their own right, often as double staircases.

Sanfelice also worked on churches in Naples, including San Lorenzo Maggiore
San Lorenzo Maggiore (Naples)
San Lorenzo Maggiore is a church in Naples, Italy. It is located at the precise geographic center of the historic center of the ancient Greek-Roman city, at the intersection of via San Gregorio Armeno and via dei Tribunali...
, San Giovanni a Carbonara
San Giovanni a Carbonara
San Giovanni a Carbonara is a church in Naples, southern Italy. It is located at the northern end of via Carbonara, just outside what used to be the eastern wall of the old city...
, and the chapel of the Nunziatella at the Nunziatella military academy
Nunziatella military academy
Besides to be a military training institution, the Nunziatella is a place of great cultural and civil heritage. Here the whole history of our country is summarized. I believe that the Republic of Italy has to treasure all its great military and civil traditions which originated in the country even...
The source of this article is wikipedia, the free encyclopedia.  The text of this article is licensed under the GFDL.