Encyclopedia
The Farquharson Rifle is a single shot hammerless falling block action
Falling block action
A falling-block action is a single-shot firearm action in which a solid metal breechblock slides vertically in grooves cut into the breech of the weapon and actuated by a lever....
rifle
Rifle
A rifle is a firearm designed to be fired from the shoulder, with a barrel that has a helical groove or pattern of grooves cut into the barrel walls. The raised areas of the rifling are called "lands," which make contact with the projectile , imparting spin around an axis corresponding to the...
designed and patented by John Farquharson, of Daldhu, Scotland in 1872. George Gibbs, a gun maker in Bristol, became a co-owner of the Farquharson patent in 1875 and was the sole maker of Farquharson rifles until the patent expired. Fewer than 1,000 Gibbs-Farquharson rifles were made, the last one being delivered in 1910.

A few years after the original Farquharson patent expired in 1889, many English gun makers began producing their own versions of Farquharson rifles utilizing actions made by Auguste Francotte in Herstal, Belgium. These actions were essentially exact copies of those used by Gibbs to build his military target Farquharson rifles, which had a solid combined lower tang and trigger guard. The actions had "PD" stamped on the receiver, which stood for "public domain," indicating there was no patent infringement in utilizing the design. W. J. Jeffery & Co. produced most of the "PD" Farquharson rifles, with the first ones being sold in 1895 as their Model 95 Falling Block Rifle. In 1904 Jefferey introduced a larger version of this action called the Model 1904 and chambered in the 600 Nitro Express
.600 Nitro Express
The .600 Nitro Express is a round in the Nitro Express series which was introduced in 1903. It is the second largest calibre in the Nitro Express line, exceeded only by Holland & Holland's .700 Nitro Express round.-Overview:...
. The Model 95 and Model 1904 were listed in the Jeffery catalogs right up until 1927. However, beginning in 1912 the advertisements for the falling block rifles carried the notation "Now made to order only, having been superseded by the Magazine Rifle." 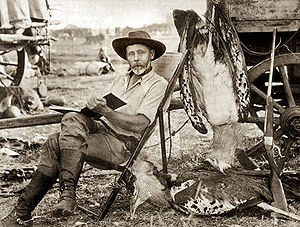 Because of their rarity, original Gibbs-Farquharson rifles are highly prized collector pieces today. The "PD" Farquharson rifles by Jeffery and other makers are less rare, but are still generally considered collector pieces rather than working weapons. For the modern hunter who appreciates the natural grace and balance of the Farquharson design, Ruger introduced their No.1
Ruger No. 1
The Ruger No. 1 is a single shot rifle, with Farquharson-style internal hammer falling block action, manufactured by Sturm, Ruger. It was introduced in 1967. An underlever lowers the block allowing loading and cocks the rifle. A falling block action is an inherently strong design, and the Ruger...
single shot rifle in 1967. The No. 1 is a proprietary Ruger falling block design loosely styled after the Farquharson rifles and is credited with rekindling interest among hunters in the single shot rifle. It remains one of Ruger's best selling firearms.