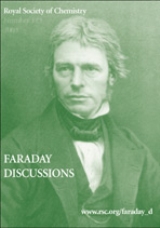 Encyclopedia
Faraday Discussions is a scientific journal
Scientific journal
In academic publishing, a scientific journal is a periodical publication intended to further the progress of science, usually by reporting new research. There are thousands of scientific journals in publication, and many more have been published at various points in the past...
publishing original research papers presented at a long-running series of conferences on physical chemistry
Physical chemistry
Physical chemistry is the study of macroscopic, atomic, subatomic, and particulate phenomena in chemical systems in terms of physical laws and concepts...
, chemical physics
Chemical physics
Chemical physics is a subdiscipline of chemistry and physics that investigates physicochemical phenomena using techniques from atomic and molecular physics and condensed matter physics; it is the branch of physics that studies chemical processes from the point of view of physics...
and biophysical chemistry which are also called Faraday Discussions, together with a record of the comments made at the meeting. The journal was originally published by the Faraday Society
Faraday Society
The Faraday Society was a British society for the study of physical chemistry, founded in 1903 and named in honour of Michael Faraday. It merged with several similar organisations in 1980 to form the Royal Society of Chemistry...
. The journal has been published by the Royal Society of Chemistry
Royal Society of Chemistry
The Royal Society of Chemistry is a learned society in the United Kingdom with the goal of "advancing the chemical sciences." It was formed in 1980 from the merger of the Chemical Society, the Royal Institute of Chemistry, the Faraday Society and the Society for Analytical Chemistry with a new...
(RSC) since that society merged into the RSC. From 1972 to 1991, it was known as the Faraday Discussions of the Chemical Society. Traditionally there have been three Faraday Discussions a year, however, from 2011 six conferences (and therefore six volumes of the journal) are organised annually.

Philip Earis is the editor
Managing editor
A managing editor is a senior member of a publication's management team.In the United States, a managing editor oversees and coordinates the publication's editorial activities...
of Faraday Discussions and the present chairman of the Standing Committee on Faraday Conferences is Dwayne E. Heard, (Leeds, UK). The journal has a 2010 impact factor
Impact factor
The impact factor, often abbreviated IF, is a measure reflecting the average number of citations to articles published in science and social science journals. It is frequently used as a proxy for the relative importance of a journal within its field, with journals with higher impact factors deemed...
of 4.538.

The Faraday Discussions are held from April to September, with the majority held in the United Kingdom, although at least one annually is held overseas. Proofs of the 20-25 invited and contributed selected papers are circulated to participants well in advance of the meeting. Since each paper has been read in advance, the actual meeting is able to concentrate on debate. The whole of the proceedings is subsequently published including submitted discussion remarks which include those that "the contributors said, think they said, or wished they had said!".

There are well established links with a number of European societies, including the Division de Chime Physique of the Société Française de Chimie, the Deutsche Bunsen Gesellschaft, and the Associazione Italiana di Chimica Fisica. Joint European meetings are held and there are international relationships worldwide both at Divisional and Specialist Interest Group level.