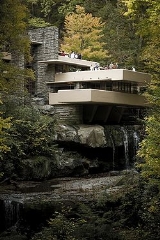 Overview
Fallingwater or Kaufmann Residence is a house designed by architect Frank Lloyd Wright
Frank Lloyd Wright
Frank Lloyd Wright was an American architect, interior designer, writer and educator, who designed more than 1,000 structures and completed 500 works. Wright believed in designing structures which were in harmony with humanity and its environment, a philosophy he called organic architecture...
in 1935 in rural southwestern Pennsylvania
Pennsylvania
The Commonwealth of Pennsylvania is a U.S. state that is located in the Northeastern and Mid-Atlantic regions of the United States. The state borders Delaware and Maryland to the south, West Virginia to the southwest, Ohio to the west, New York and Ontario, Canada, to the north, and New Jersey to...
, 50 miles southeast of Pittsburgh
Pittsburgh, Pennsylvania
Pittsburgh is the second-largest city in the US Commonwealth of Pennsylvania and the county seat of Allegheny County. Regionally, it anchors the largest urban area of Appalachia and the Ohio River Valley, and nationally, it is the 22nd-largest urban area in the United States...
. The home was built partly over a waterfall on Bear Run in the Mill Run section of Stewart Township
Stewart Township, Pennsylvania
Stewart Township is a township in Fayette County, Pennsylvania, United States. It is part of the Pittsburgh Metro Area. The population was 743 at the 2000 census....
, Fayette County, Pennsylvania
Fayette County, Pennsylvania
Fayette County is a county located in the U.S. state of Pennsylvania. As of the2010 census, the population was 136,606. The county is part of the Pittsburgh Metropolitan Statistical Area....
, in the Laurel Highlands
Laurel Highlands
The Laurel Highlands is a region in southwestern Pennsylvania made up of Fayette County, Somerset County and Westmoreland County. It has a population of about 600,000 people....
of the Allegheny Mountains
Allegheny Mountains
The Allegheny Mountain Range , also spelled Alleghany, Allegany and, informally, the Alleghenies, is part of the vast Appalachian Mountain Range of the eastern United States and Canada...
.

Hailed by Time
Time (magazine)
Time is an American news magazine. A European edition is published from London. Time Europe covers the Middle East, Africa and, since 2003, Latin America. An Asian edition is based in Hong Kong...
shortly after its completion as Wright's "most beautiful job", it is listed among Smithsonian
Smithsonian (magazine)
Smithsonian is the official journal published by the Smithsonian Institution in Washington, D.C. The first issue was published in 1970.-History:...
s Life List of 28 places "to visit before you die." It was designated a National Historic Landmark
National Historic Landmark
A National Historic Landmark is a building, site, structure, object, or district, that is officially recognized by the United States government for its historical significance...
in 1966.

How is Fallingwater heated and cooled?
More
x