The ICU was confined to the capital city of Mogadishu after a series of successive losses at the battles of Baidoa
Baidoa
Baidoa is a city in south-central Somalia, situated by road northwest of the capital Mogadishu. It is the capital of the Bay region, which is traditionally inhabited by the Digil and Mirifle clans....
, Bandiradley, Beledweyne
Beledweyne
Beledweyne is a city in central Somalia. It is the capital of the Hiraan province, and is located in the central valley of the Shebelle river near the Ogaden, some 206 miles north of Mogadishu, the nation's capital. The Shebelle river divides the town into east and west...
, and finally Jowhar
Jowhar
Jowhar is the capital town of the Shabeellaha Dhexe region of Somalia . Along with Baidoa, it used to form the joint administrative capital of the Transitional Federal Government, which captured it from the Islamic Courts Union....
.

Somalia's envoy to Ethiopia confirmed Ethiopian-backed Somali government troops would lay siege
Siege
A siege is a military blockade of a city or fortress with the intent of conquering by attrition or assault. The term derives from sedere, Latin for "to sit". Generally speaking, siege warfare is a form of constant, low intensity conflict characterized by one party holding a strong, static...
to Mogadishu until it surrenders, rather than assault the city. "We are not going to fight for Mogadishu to avoid civilian casualties… Our troops will surround Mogadishu until they surrender," he told reporters in Addis Ababa.

ICU troops abandoned their barracks in the town of Balad
Balad, Somalia
Balad is one of the districts of Middle Shebelle region of Somalia. It is located about 36 kilometers northeast of the capital city of Mogadishu. It has an area of with an estimated population of 480,000. Most of the population is Mataan Abdulle, part of Wabudhan from Abgaal clan of Hawiye...
, the last town before the outskirts of Mogadishu. Ethiopian and Somali government forces, accompanied by patrolling Ethiopian jets, approached within 30 km (18 mi) of the city.

Clan leaders in Mogadishu are considering whether to back the government troops advancing on the capital. This would preempt a possible lengthy and bloody fight for the capital and deal a devastating blow to the Islamic Courts. Islamic fighters were seen changing out of their uniforms and into civilian clothing while women were spotted on the streets selling the stimulant khat
Khat
Khat, qat, gat or Waquish Spoken from true Yemeni, is a flowering plant native to tropical East Africa and the Arabian Peninsula....
which was banned by the Islamists.

Areas in the north of Mogadishu were reported to be overtaken by clan militias who rapidly switched allegiances and reversed the policies of the ICU, allowing khat to be sold openly, and for cinemas to reopen. ICU troops were reported in hiding and there was speculation in the capital that Kismayo would fall soon.

As fighting neared Mogadishu, the Islamists turned over their weapons to the clans in the capital and the Hawiye
Hawiye
The Hawiye is a Somali clan. Members of the clan primarily live in central and southern Somalia, in the Ogaden and the North Eastern Province , and in smaller numbers in other countries. Like many Somalis, Hawiye members trace their ancestry to Irir Samaale...
, one of Somalia's largest clans, began discussing a peaceful resolution with the interim government. The stability created by the Islamic militias also began to collapse with people returning to their homes and bandits once again roaming the streets. Fighting began early on the 27th in Yaqshiid, a district in northern Mogadishu, as clan militias attempted to raid an arms warehouse. The clan militias, who had been disarmed by the ICU, appeared to be attempting to rearm in preparation for the return of the warlords associated with the government. Abdirahman Dinari, spokesperson for the TFG, stated that these were a minority of militias and that they would be "dealt with" once they had taken control of the city. Most businesses had closed by the 28th, as proprietors waited for developments.

The top leaders of the ICU, including Sheikh
Sheikh
Not to be confused with sikhSheikh — also spelled Sheik or Shaikh, or transliterated as Shaykh — is an honorific in the Arabic language that literally means "elder" and carries the meaning "leader and/or governor"...
Hassan Dahir Aweys
Hassan Aweys
Hassan Dahir Aweys is a Somali political figure who was added to the U.S. government's list of terrorists in 2001. Aweys was the head of the 90-member shura council of the Islamic Courts Union of Somalia and was viewed as one of the more radical leaders of the Union, which promoted shari'a and...
, Sheikh Sharif Sheikh Ahmed and Sheikh Abdirahman Janaqow
Abdirahman Janaqow
Abdirahman Mahmud Farah Janaqow is a Somali leader, and he was deputy chairman, and a member of the Murusade clan. of the Islamic Courts Union of Somalia . He and other leaders signed a capitulation of Mogadishu on 27 December 2006 after military losses. However they continued military resistance...
, resigned in anticipation of the siege. Their official press release called upon ICU fighters to secure the areas in which they were stationed and expressed their regret that foreign powers had invaded the country and that Somalia would return to chaos. 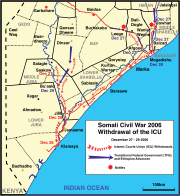 On December 28, TFG spokesman Abdirahman Dinari cautiously expressed, "We are taking control of the city and I will confirm when we have established complete control… Our forces already effectively control Mogadishu because we have taken over the two control points on the main roads outside the city… Within two to three hours we will capture the whole city." He also added that the government was in control of 95% of the country, but a state of emergency would be imposed to bring law and order back to the country. An ebullient Member of Parliament, Mohamed Jama Fuurah, called Reuters from the port of Mogadishu saying, "The government has taken over Mogadishu. We are now in charge." Pro-government militias were said to have control of key locations, including the former presidential palace.

Ali Ghedi
Ali Mohammed Ghedi
Ali Mohamed Ghedi was the Prime Minister of the Transitional Federal Government of Somalia from 2004 to 2007. He was relatively unknown in political circles upon his appointment as prime minister in November 2004. He is affiliated with the Abgaal subclan of Mogadishu's Hawiye clan, one of...
, the Prime Minister of the transitional government, stated that Somali government troops had entered Mogadishu without resistance, as well as the town of Afgoye on its outskirts. Mohamed Jama Furuh, a member of parliament and former warlord, took control of Mogadishu's seaport on the government's behalf, an area he had controlled before the rise of the ICU as a warlord. The President, Abdullahi Yusuf, asserted that TFG troops were not a threat to the city-dwellers, though there were some reports of gunfire in the city.

On December 29, Ghedi entered the city after consultations with clan leaders on the outskirts. He was received by cheering crowds and anti-Ethiopian protests.

Roughly 3,000 ICU fighters fled towards the port city of Kismayo, their last remaining stronghold, 300 miles (500km) to the south. In Kismayo, executive leader of the ICU, Sharif Sheikh Ahmed was defiant, "We will not run away from our enemies. We will never depart from Somalia. We will stay in our homeland."

On December 31, in Mogadishu a missile aimed at Ethiopian troops slammed into a residential area reportedly killing one woman and injuring a man and their daughter. Also, an explosion occurred around 9pm local time at the Hotel Ramadan in Yaaqshiid district, former headquarters of the ICU. Two people were injured. It was speculated that the target might have been Ethiopian troops who had taken over control of the hotel.
The source of this article is wikipedia, the free encyclopedia.  The text of this article is licensed under the GFDL.