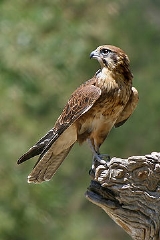 Overview
A falcon is any species
Species
In biology, a species is one of the basic units of biological classification and a taxonomic rank. A species is often defined as a group of organisms capable of interbreeding and producing fertile offspring. While in many cases this definition is adequate, more precise or differing measures are...
of raptor
Bird of prey
Birds of prey are birds that hunt for food primarily on the wing, using their keen senses, especially vision. They are defined as birds that primarily hunt vertebrates, including other birds. Their talons and beaks tend to be relatively large, powerful and adapted for tearing and/or piercing flesh....
in the genus
Genus
In biology, a genus is a low-level taxonomic rank used in the biological classification of living and fossil organisms, which is an example of definition by genus and differentia...
Falco. The genus contains 37 species, widely distributed throughout Europe, Asia, and North America.

Adult falcons have thin tapered wings, which enable them to fly at high speed and to change direction rapidly. Fledgling falcons, in their first year of flying, have longer flight feather
Flight feather
Flight feathers are the long, stiff, asymmetrically shaped, but symmetrically paired feathers on the wings or tail of a bird; those on the wings are called remiges while those on the tail are called rectrices . Their primary function is to aid in the generation of both thrust and lift, thereby...
s which makes their configuration more like that of a general-purpose bird such as a broadwing.

What's the difference in a hawk and a falcon?
More
x