Fairport High School (FHS) is a public high school serving the tenth through twelfth grades in Fairport, NY
Fairport, New York
Fairport is a village located in the town of Perinton which is part of Monroe County, New York. Fairport is a suburb east of Rochester. It is also known as the "Crown Jewel of the Erie Canal"...
and is part of the Fairport Central School District
Fairport Central School District
The Fairport Central School District is a public school district in New York State that serves approximately 7,100 students in the village of Fairport and the town of Perinton in Monroe County, with over 1200 employees and an operating budget of $94 million .The average class size is 22.3 students...
. Principal Christopher Salinas is currently in his second year at FHS.

Current enrollment estimates place the student population around 1,800. The Class of 2009 was the largest class to pass through FHS in approximately 15 years, totaling just under 700 students. FHS takes part in numerous international exchange programs, including trips to Ireland, France, Spain, Germany and Italy.

In 2009, Fairport became the first high school in New York State to offer a course in Game Design and Development
Game design
Game design, a subset of game development, is the process of designing the content and rules of a game in the pre-production stage and design of gameplay, environment, storyline, and characters during production stage. The term is also used to describe both the game design embodied in a game as...
. On a similar note, after town residents approved a technology funding measure, the Fairport Central School District
Fairport Central School District
The Fairport Central School District is a public school district in New York State that serves approximately 7,100 students in the village of Fairport and the town of Perinton in Monroe County, with over 1200 employees and an operating budget of $94 million .The average class size is 22.3 students...
made plans for a complete technological overhaul of FHS which will begin during Summer 2010. The overhaul includes readily available 802.11n wireless networks for both students and faculty, as well as high-speed synthetic fiber optic cables for wired computers.

In 1924 the high school was on West Avenue in the village of Fairport. Later, it was at Minerva Deland High School. July 10, 1968 marked the groundbreaking of the current Fairport High School, which opened to students on December 7, 1970.

The pre-1968 Fairport High School campus was located at 71 West Avenue, only 2 blocks from Main Street in the village of Fairport, NY. It was built and opened in 1924 to serve as the village's first public high school. From 1968 until the early 1980s, the old campus served as the West Avenue School, with grades 4–6. As the school district's needs changed, the old campus was sold in 1984 and developed into condominiums.

As the population of the town increased the town saw the need to build a much larger high school. The campus was relocated to 1358 Ayrault Road to accommodates a much larger campus. In 1968 land was broken for the new Fairport High School Campus.

The new campus was much larger than its predecessor which included a much larger surface area for athletic events to be held on. The athletic fields include:
In addition there is a concession/admissions stand used for HS Sporting Events.

In the 1990s an East and West Wing was added to the school which held additional class space.
In 2006 there were plans for a 50000 square feet (4,645.2 m²) field house and the installation of lights on the football field.
The fall 2011 sports season is the first time the new field lights are in use. In 2007 a multi-use turf field was approved.

The high school is divided into three houses (Red, White, Blue) each with its own assistant principal. Several course areas are offered to students:

Day Jazz
Jazz
Jazz is a musical style that originated at the beginning of the 20th century in African American communities in the Southern United States. It was born out of a mix of African and European music traditions. From its early development until the present, jazz has incorporated music from 19th and 20th...
, Afternoon Jazz, Sophomore Band, Symphonic Band, Concert Band, Full Orchestra, Chamber Orchestra, Polyphonic Women's Choir, Polyphonic Mixed Choir, and Sophomore Choir are all credit-bearing ensembles. The groups usually obtain gold or gold with distinction ratings at NYSSMA festivals. Students from the three bands are also members of the Pep Band, which plays at home games, at pep rallies, and in parades. A Pit Orchestra is also selected from the top students every year to perform during the spring musical.

The Prisms Concert, which takes place every spring, is a concert featuring many of these groups, as well as students performing solos or small group pieces. This concert is unique because the groups play in different areas of the auditorium. A spotlight focuses on the group or student performing as they play one three-minute piece. When they finish, the spotlight moves to another performer. 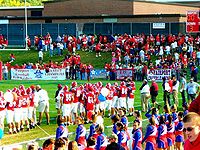 The Fairport High School athletic nickname is the Red Raiders. The school's colors are red, white and blue. FHS has a strong athletic tradition in many of its varsity sports such as Baseball, Basketball, Cheerleading
Cheerleading
Cheerleading is a physical activity, sometimes a competitive sport, based on organized routines, usually ranging from one to three minutes, which contain the components of tumbling, dance, jumps, cheers, and stunting to direct spectators of events to cheer on sports teams at games or to participate...
, Football
American football
American football is a sport played between two teams of eleven with the objective of scoring points by advancing the ball into the opposing team's end zone. Known in the United States simply as football, it may also be referred to informally as gridiron football. The ball can be advanced by...
, Field Hockey
Field hockey
Field Hockey, or Hockey, is a team sport in which a team of players attempts to score goals by hitting, pushing or flicking a ball into an opposing team's goal using sticks...
, Hockey
Hockey
Hockey is a family of sports in which two teams play against each other by trying to maneuver a ball or a puck into the opponent's goal using a hockey stick.-Etymology:...
, Lacrosse
Lacrosse
Lacrosse is a team sport of Native American origin played using a small rubber ball and a long-handled stick called a crosse or lacrosse stick, mainly played in the United States and Canada. It is a contact sport which requires padding. The head of the lacrosse stick is strung with loose mesh...
, Tennis, Volleyball, Soccer, Softball
Softball
Softball is a bat-and-ball sport played between two teams of 10 to 14 players. It is a direct descendant of baseball although there are some key differences: softballs are larger than baseballs, and the pitches are thrown underhand rather than overhand...
, Swimming. Fairport offers 35 varsity sports as well as offerings at the Junior Varsity and Modified levels.

Fairport High School's FIRST Robotics team has been a participant in the FIRST Robotics Competition
FIRST Robotics Competition
The FIRST Robotics Competition is an international high school robotics competition organized by FIRST. Each year, teams of high school students compete to build robots weighing up to , not including battery and bumpers, that can complete a task, which changes every year...
program for 13 years. When the team was founded in 1997 they were sponsored by Eastman Kodak
Eastman Kodak
Eastman Kodak Company is a multinational imaging and photographic equipment, materials and services company headquarted in Rochester, New York, United States. It was founded by George Eastman in 1892....
and was known as Team 36 Kod-Red and, was the first suburban FIRST team in the Rochester, NY region. In 1999 Kodak discontinuedits sponsorship and the Gleason Works became the sponsor for the team known as Team 578 Blue Lightning. The team is no longer sponsored by the Gleason Works, but Xerox Corporation has agreed to become the team's new major sponsor. They are supported mainly by the Fairport High School. During the 2010–2011 school year, the team changed it's name to Red Raider Robotics (R^3) so it would be more closely linked with the school. In 2000 they became the FIRST Philadelphia Regional Winners and the year after they became the FIRST Nasa VCU Regional Winners. In 2004 the team became the FRC Pittsburgh Finalist. 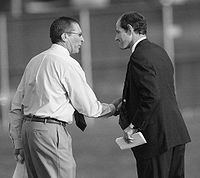 Every spring, Fairport students celebrate Brotherhood/Sisterhood Week. The week is focused around Civility, Awareness, Respect, and Embrace (CARE). The event is most prominent at FHS, where a different activity takes place each day of the week. Monday is Family Talk Day, during which a student and an adult are selected to speak to the students. Tuesday consists of a presentation during which student voices writings are read. The writings anonymously tell students' feelings about CARE. On Wednesday, a community member is asked to speak. On Wednesday of the 2007 celebration, Rachel's Challenge visited the school. The program encouraged students to improve the atmosphere of their school. The program impacted the students in a large way, partly because they had lost a beloved member of the student body the night before. Wednesday is also the annual Junior-4th Grade walk. The district's 4th and 11th graders walk the village streets together to build relationships with each other. Thursday's program is known as Unplugged, and is a non-stop musical performance available to students with free periods or lunch. Friday concludes the eventful week with Outreach Day. On this day, the entire school is bused to the three elementary schools. Students meet with their new little brothers and sisters for an hour. They play games and teach them about CARE. A song written about this week by former students Sean Lyness, John Cieply, Pat Dupont, and David Lachance is played yearly. 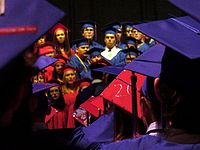