The hull is divided in two parts, each one with its own twin axle bogie
Bogie
A bogie is a wheeled wagon or trolley. In mechanics terms, a bogie is a chassis or framework carrying wheels, attached to a vehicle. It can be fixed in place, as on a cargo truck, mounted on a swivel, as on a railway carriage/car or locomotive, or sprung as in the suspension of a caterpillar...
, plus a central bogie in the middle.
Each bogie mounts four DC motors, each providing 400 kW, for a total of 12.

The initial project speed was 160 km/h, but later it was reduced to 150 due to stability problems; further, the heavy mass of the locomotive did not allow the use of rheostatic braking.

Recently many E656s have been transferred to the Cargo Division of Trenitalia
Trenitalia
Trenitalia is the primary train operator in Italy. Trenitalia is owned by Ferrovie dello Stato, itself owned by the Italian Government. It was created in 2000 following the EU directive on the deregulation of rail transport.-Passenger transport:...
to haul freight trains. The gear ratio has been reduced from 28/61 to 23/66, and the speed limit to 120 km/h. The modified units form the E655 class.

The 656 class is officially subdivided by FS into three series:


The differences between series regard electrical and mechanical equipment.

The 3rd series locomotives have four field weakening shunts in parallel and super-parallel motor combinations (where the other series have three), and the 78-wire cable to remote control the locomotive from a control car
Control car (rail)
A control car is a generic term for a non-powered railroad vehicle that can control operation of a train from the end opposite to the position of the locomotive...
(Carrozza semipilota) or another Delfina-fitted locomotive.

Differences between locomotives can also be summed up as follows:

The locomotive has twelve 82/400 motors, with class B insulation, four per bogie.

They can be connected in the same combinations used on E646-5
FS class E646
The FS E645 and E646 are two classes of similar electric locomotives used on Italian railways. They were introduced during the 1950s and they have been retired in 2009.- History :...
:


Like their predecessors, E656s have a rheostat (31 resistors subdivided in 21 packs, for a total resistance of 17,015 ohm
Ohm
The ohm is the SI unit of electrical resistance, named after German physicist Georg Simon Ohm.- Definition :The ohm is defined as a resistance between two points of a conductor when a constant potential difference of 1 volt, applied to these points, produces in the conductor a current of 1 ampere,...
) that, by varying its resistance, gradually regulates the current to the motors on starts, and on each time a transition to the next combination is made; however, differently from older Italian types, rheostatic exclusion is not controlled manually, by default. 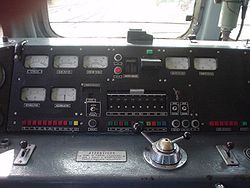 The driver selects the desired combination, which is automatically accomplished by a system which, through a particular array of logic gate
Logic gate
A logic gate is an idealized or physical device implementing a Boolean function, that is, it performs a logical operation on one or more logic inputs and produces a single logic output. Depending on the context, the term may refer to an ideal logic gate, one that has for instance zero rise time and...
s and other components (capacitor
Capacitor
A capacitor is a passive two-terminal electrical component used to store energy in an electric field. The forms of practical capacitors vary widely, but all contain at least two electrical conductors separated by a dielectric ; for example, one common construction consists of metal foils separated...
s, resistor
Resistor
A linear resistor is a linear, passive two-terminal electrical component that implements electrical resistance as a circuit element.The current through a resistor is in direct proportion to the voltage across the resistor's terminals. Thus, the ratio of the voltage applied across a resistor's...
s, etc.), called "RAE" (Relè
Relay
A relay is an electrically operated switch. Many relays use an electromagnet to operate a switching mechanism mechanically, but other operating principles are also used. Relays are used where it is necessary to control a circuit by a low-power signal , or where several circuits must be controlled...
Accelerazione Elettronico), controls a rotating device (called avviatore automatico).
The driver selects the maximum exclusion current through a potentiometer on his desk, and the system, when the c.e.m.f.
Counter-electromotive force
The counter-electromotive force also known as back electromotive force is the voltage, or electromotive force, that pushes against the current which induces it. CEMF is caused by a changing electromagnetic field. It is the effect of Lenz's Law of electromagnetism...
present in the motors brings the current (which is read by transducer
Transducer
A transducer is a device that converts one type of energy to another. Energy types include electrical, mechanical, electromagnetic , chemical, acoustic or thermal energy. While the term transducer commonly implies the use of a sensor/detector, any device which converts energy can be considered a...
s) to a value lower than the set current, makes the avviatore advance, closing the rheostat contactors (thus shunting the relative resistors) as speed builds up, until it is totally excluded; similarly it may go backwards, when the current reaches high levels in relation to speed.

The different connections of the motors in the various combinations are accomplished by closing various contactor
Contactor
A contactor is an electrically controlled switch used for switching a power circuit, similar to a relay except with higher current ratings. A contactor is controlled by a circuit which has a much lower power level than the switched circuit....
s; their set-ups during transitions are handled by a device called "CEM" (Commutatore Escluditore Motori").

If rheostatic exclusion is needed to be controled finely (e.g. on coupling maneuvers, or in case of a heavy train or poor adherence situations), the driver can use the "PAC" (Pomello Avanzamento Comandato), a small lever that makes the "avviatore automatico" advance or go backwards step by step (for "Series" combination only).

On Third series locomotives (official classification), many functions such as the ones of RAE, Avviatore Automatico, CEM, etc., are assumed by an electronic control unit (called Delfina) derived from the ones employed on FS Class E444
FS Class E444
The FS E444 is a class of Italian railways electric locomotives. They were introduced in the course of the 1960 until 1975. Starting from 1995, all E444s were upgraded as E444R.The locomotives are nicknamed Tartaruga .-E444 standard:...
.

The rheostat is robust and designed to stand high currents, however it cannot for an excessive period of time, as there is the risk of overheating; the driver has to keep this in mind when driving. When the temperature is too high (greater than 200 C°), the "VR" (Ventilazione Reostato, Rheostat Fans) light starts to blink on the driver's console to warn him.


They are fed in various ways, depending on the series:


Motor cooling fans are automatically activated when the reverser is in non-neutral position, while rheostat fans activate when the temperature into the rheostat's resistors reaches 65 °C or they are manually activated by the driver via an apposite button.