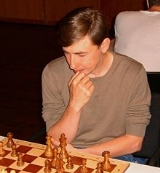 Encyclopedia
Evgeny Bareev is a Russian chess Grandmaster and chess coach. In October 2003, he was in fourth place in the world rankings, with an Elo rating
Elo rating system
The Elo rating system is a method for calculating the relative skill levels of players in two-player games such as chess. It is named after its creator Arpad Elo, a Hungarian-born American physics professor....
of 2739.

Bareev was World Under-16 Champion
World Youth Chess Championship
The World Youth Chess Championship is a chess competition for girls and boys under the age of 8, 10, 12, 14, 16 and 18.The first predecessor of the youth championship was the Cadet Championship. It started off unofficially in 1974 in France for players under 18. The 1975 and 1976 editions were also...
in 1982 when his talent was first showcased internationally. Bareev was a member of the Russian national team in the two Chess Olympiad
Chess Olympiad
The Chess Olympiad is a biennial chess tournament in which teams from all over the world compete against each other. The event is organised by FIDE, which selects the host nation.-Birth of the Olympiad:The first Olympiad was unofficial...
s of 1994 and 1996. The biggest success in his career was winning the Corus super-tournament
Corus chess tournament
The Tata Steel Chess Tournament formerly called the Corus chess tournament takes place every year, usually in January, in a small town called Wijk aan Zee, part of the larger Beverwijk in the province of North Holland in the Netherlands...
in Wijk aan Zee 2002. In this event he scored 9/13 ahead of elite players like Alexander Grischuk
Alexander Grischuk
Alexander Igorevich Grischuk is a Russian chess grandmaster and Russian Champion in 2009.-Chess career:In the FIDE World Chess Championship 2000, Grischuk he made it to the semifinals, losing to Alexei Shirov....
, Michael Adams, Alexander Morozevich
Alexander Morozevich
Alexander Morozevich is a Russian chess Grandmaster. In the November 2011 FIDE list, he had an Elo rating of 2762, making him the 9th-highest rated player in the world, although he has previously ranked as high as second, in the July 2008 list....
, and Peter Leko
Péter Lékó
On the way to winning the prestigious Corus chess tournament in 2005, Lékó defeated Grandmaster Viswanathan Anand with the black pieces. The moves were:...
. In a man vs. machine contest in January 2003, Bareev took on the chess program HIARCS
HIARCS
HIARCS is a commercial computer chess program developed by Mark Uniacke. Its name is an acronym stands for higher intelligence auto response chess system.-Overview:...
in a four game-match: all four games were drawn. In the Enghien-les-Bains tournament held in France in 2003, Bareev finished in first place.

At the 2005 Chess World Cup, Bareev qualified for the Candidates Tournament for the FIDE World Chess Championship 2007, played in May–June 2007. He won his first round match against Judit Polgár
Judit Polgár
Judit Polgár is a Hungarian chess grandmaster. She is by far the strongest female chess player in history. In 1991, Polgár achieved the title of Grandmaster at the age of 15 years and 4 months, the youngest person ever to do so at that time.Polgár was ranked No...
(+2-1=3), but was eliminated when he lost his second round match against Peter Leko
Péter Lékó
On the way to winning the prestigious Corus chess tournament in 2005, Lékó defeated Grandmaster Viswanathan Anand with the black pieces. The moves were:...
(+0-2=3).

In 2010 he tied for 1st-4th with Konstantin Chernyshov
Konstantin Chernyshov
Konstantin Chernyshov is a Russian chess grandmaster .In 2008 he tied for 1st-8th with Vugar Gashimov, David Arutinian, Yuriy Kryvoruchko, Sergey Fedorchuk, Andrei Deviatkin, Vasilios Kotronias and Erwin L'Ami in the Cappelle-la-Grande Open Tournament...
, Le Quang Liem
Le Quang Liem
Lê Quang Liêm is a leading Vietnamese chess player. He was the Under-14 World Youth Chess Champion in July 2005. He competed for Vietnam at the Chess Olympiads in 2006 and 2008....
and Ernesto Inarkiev
Ernesto Inarkiev
Ernesto Inarkiev is a Russian chess Grandmaster. He was named after Ernesto "Che" Guevara. In 2006 he came third in the 59th Russian Chess Championship Superfinal....
in the Moscow Open.