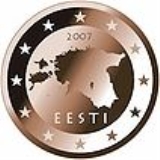 Encyclopedia
Estonian euro coins feature a single design for all eight coins. This is a design by Lembit Lõhmus and features a silhouette map of Estonia
Estonia
Estonia , officially the Republic of Estonia , is a state in the Baltic region of Northern Europe. It is bordered to the north by the Gulf of Finland, to the west by the Baltic Sea, to the south by Latvia , and to the east by Lake Peipsi and the Russian Federation . Across the Baltic Sea lies...
together with the word Eesti (Estonia) and twelve stars
European symbols
A number of symbols of Europe have emerged throughout history. Depending on the symbol, they can apply to Europe as a whole, European unity or merely to the European Union...
, symbolic of the European Union, surrounding the map. This was the winning design in a public vote of ten announced in December 2004.

Estonian euro coins entered circulation on 1 January 2011. Estonia is the fifth of ten states that joined the EU in 2004, and the first ex-Soviet republic, to join the eurozone
Eurozone
The eurozone , officially called the euro area, is an economic and monetary union of seventeen European Union member states that have adopted the euro as their common currency and sole legal tender...
. Of the ten new member states, Estonia was the first to unveil its design. It originally planned to adopt the euro on 1 January 2007; however, it did not formally apply when Slovenia
Slovenia
Slovenia , officially the Republic of Slovenia , is a country in Central and Southeastern Europe touching the Alps and bordering the Mediterranean. Slovenia borders Italy to the west, Croatia to the south and east, Hungary to the northeast, and Austria to the north, and also has a small portion of...
did, and officially changed its target date to 1 January 2008, and later, to 1 January 2011. On 12 May 2010 the European Commission announced that Estonia had met all criteria to join the eurozone. On 8 June 2010, the EU finance ministers agreed that Estonia would be able to join the euro on 1 January 2011. On 13 July 2010, Estonia received the final approval from the ECOFIN to adopt the euro as from 1 January 2011. On the same date the exchange rate at which the kroon
Estonian kroon
In 1992, coins were introduced in denominations of 5, 10, 20 & 50 senti, as well as 1 kroon. The 1 kroon was struck in cupronickel, the others in aluminum-bronze. However, in 1997, nickel-plated steel 20 senti were introduced, followed by aluminum-bronze 1 kroon in 1998. 5 senti coins were not...
would be exchanged for the euro (€1 = 15.6466 krooni) was also announced. On 20 July 2010, mass production of Estonian euro coins began in the mint of Finland.

Ethnic Setos
Setos
Setos are an autochthonous ethnic and linguistic minority in south-eastern Estonia and north-western Russia. Setos are mostly Seto-speaking Orthodox Christians of Estonian nationality. Their dialect, that some consider an independent language - the Seto language belongs to the Finnic group of the...
have protested the design of the coin, claiming that the outline of the map of Estonia does not include the former south eastern region of Estonia that constituted a part of the Seto homeland annexed by Stalin during the occupation of the Baltic states. On the other hand, a Russian lawyer Sergei Seredenko claimed that the outline included Russian controlled areas. The Russian embassy was prompted to issue a statement that the euro coins do indeed depict the current borders of the country's territory.