The Estonian Declaration of Independence, also known as the Manifesto to the Peoples of Estonia , is the founding act of the Republic of Estonia
Estonia
Estonia , officially the Republic of Estonia , is a state in the Baltic region of Northern Europe. It is bordered to the north by the Gulf of Finland, to the west by the Baltic Sea, to the south by Latvia , and to the east by Lake Peipsi and the Russian Federation . Across the Baltic Sea lies...
from 1918. It is celebrated on 24 February, the National Day
National Day
The National Day is a designated date on which celebrations mark the nationhood of a nation or non-sovereign country. This nationhood can be symbolized by the date of independence, of becoming republic or a significant date for a patron saint or a ruler . Often the day is not called "National Day"...
or Estonian Independence Day
Independence Day
An Independence Day is an annual event commemorating the anniversary of a nation's assumption of independent statehood, usually after ceasing to be a colony or part of another nation or state, and more rarely after the end of a military occupation...
.

The declaration was drafted by the Salvation Committee
Salvation Committee
The Estonian Salvation Committee was the executive body of the Estonian Provincial Assembly that issued the Estonian Declaration of Independence....
elected by the elders of the Estonian Provincial Assembly. Originally intended to be proclaimed on 21 February 1918, the proclamation was delayed until the evening of 23 February, when the manifesto was printed and read out aloud publicly in Pärnu
Pärnu
Pärnu is a city in southwestern Estonia on the coast of Pärnu Bay, an inlet of the Gulf of Riga in the Baltic Sea. It is a popular summer vacation resort with many hotels, restaurants, and large beaches. The Pärnu River flows through the city and drains into the Gulf of Riga...
. On the next day, 24 February, the manifesto was printed and distributed in the capital, Tallinn
Tallinn
Tallinn is the capital and largest city of Estonia. It occupies an area of with a population of 414,940. It is situated on the northern coast of the country, on the banks of the Gulf of Finland, south of Helsinki, east of Stockholm and west of Saint Petersburg. Tallinn's Old Town is in the list...
.

During World War I
World War I
World War I , which was predominantly called the World War or the Great War from its occurrence until 1939, and the First World War or World War I thereafter, was a major war centred in Europe that began on 28 July 1914 and lasted until 11 November 1918...
, between retreating Russian and advancing German troops, the Occupation of Estonia by German Empire
Occupation of Estonia by German Empire
The occupation of Estonia by the German Empire occurred during the later stages of the First World War. On October 11–21, 1917, when the Imperial German Army occupied the West Estonian archipelago , consisting of the islands of Saaremaa , Hiiumaa , and Muhu...
nearing, the Salvation Committee
Salvation Committee
The Estonian Salvation Committee was the executive body of the Estonian Provincial Assembly that issued the Estonian Declaration of Independence....
of the Estonian National Council, Maapäev
Maapäev
The Estonian Provincial Assembly was elected after the February Revolution in 1917 as the national diet of the Autonomous Governorate of Estonia in Russian Empire....
, declared the independence of Estonia on 24 February 1918. However, the German forces did not recognize the independence. After the German Revolution
German Revolution
The German Revolution was the politically-driven civil conflict in Germany at the end of World War I, which resulted in the replacement of Germany's imperial government with a republic...
, between 11 and 14 November 1918 the representatives of Germany formally handed over political power in Estonia to the national government. The Russian Bolshevik invasion and The Estonian War of Independence followed. On 2 February 1920, the Peace Treaty of Tartu
Treaty of Tartu (Russian–Estonian)
Tartu Peace Treaty or Treaty of Tartu was a peace treaty between Estonia and Russian SFSR signed on February 2, 1920 ending the Estonian War of Independence. The terms of the treaty stated that "Russia unreservedly recognises" the independence of Republic of Estonia de jure and renounced in...
was signed by the Republic of Estonia and Bolshevist Russia
Russian Soviet Federative Socialist Republic
The Russian Soviet Federative Socialist Republic , commonly referred to as Soviet Russia, Bolshevik Russia, or simply Russia, was the largest, most populous and economically developed republic in the former Soviet Union....
. The Republic of Estonia obtained international recognition and became a member of the League of Nations
League of Nations
The League of Nations was an intergovernmental organization founded as a result of the Paris Peace Conference that ended the First World War. It was the first permanent international organization whose principal mission was to maintain world peace...
in 1921. 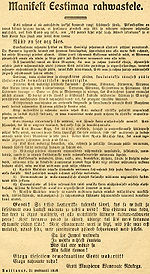 MANIFESTO TO THE PEOPLES OF ESTONIA

In the course of centuries never have the Estonian people lost their desire for independence. From generation to generation have they kept alive the hidden hope that in spite of enslavement and oppression by hostile invaders the time will come to Estonia "when all splinters, at both end, will burst forth into flames" and when "Kalev will come home to bring his children happiness."

Now that time has arrived.

An unprecedented fight between nations has crushed the rotten foundations of the Russian Tsarist Empire. All over the Sarmatian plains ruinous anarchy is spreading, threatening to overwhelm in its wake all the nations living in the former Russian Empire. From the West the victorious armies of Germany are approaching in order to claim their share of Russia's legacy and, above all, to take possession of the coastal territories of the Baltic Sea.

In this hour, the Estonian National Council, as the legal representative of our land and people, has, in unanimous agreement with Estonian democratic political parties and organizations, and by virtue of the right of self-determination of peoples, found it necessary to take the following decisive steps to shape the destiny of the Estonian land and people.

within his historical and ethnic boundaries, is declared as of today an

The independent Republic of Estonia shall include Harjumaa, Läänemaa, Järvamaa, Virumaa, with the city of Narva and its surroundings, Tartumaa, Võrumaa, Viljandimaa, and Pärnumaa with the Baltic islands of Saaremaa, Hiiumaa, Muhumaa, and others where the Estonians have settled for ages in large majorities. Final determination of the boundaries of the Republic in the areas bordering on Latvia and Russia will be carried out by plebiscite after the conclusion of the present World War.

In the aforementioned areas the only supreme and organizing authority is the democratically supported Estonian Salvation Committee created by the Estonian National Council.

The Republic of Estonia wishes to maintain absolute political neutrality towards all neighbouring states and peoples and expects that they will equally respond with complete neutrality.

Estonian military troops shall be reduced to the extent necessary to maintain internal order. Estonian soldiers serving in the Russian military forces will be called home and demobilized.

Until the Estonian Constituent Assembly, elected by general, direct, secret, and proportional elections, will convene and determine the constitutional structure of the country, all executive and legislative authority will remain vested in the Estonian National Council and in the Estonian Provisional Government created by it, whose activities must be guided by the following principles:

1. All citizens of the Republic of Estonia, irrespective of their religion, ethnic origin, and political views, are going to enjoy equal protection under the law and courts of justice of the Republic.

2. All ethnic minorities, the Russians, Germans, Swedes, Jews, and others residing within the borders of the republic, are going to be guaranteed the right to their cultural autonomy.

3. All civic freedoms, the freedom of expression, of the press, of religion, of assembly, of association, and the freedom to strike as well as the inviolability of the individual and the home, shall be irrefutably effective within the territory of the Estonian Republic and based on laws, which the Government must immediately work out.

4. The Provisional Government is given the task of immediately organizing courts of justice to protect the security of the citizens. All political prisoners shall be released immediately.

5. The city, county, and township local governments are called upon to immediately continue their work, which has been violently interrupted.

6. For maintenance of public order, people's militia, subordinated to local governments, shall be immediately organized and citizens' self-defence organizations established in the cities and rural areas.

7. The Provisional Government is instructed to work out, without delay, on a broad democratic basis, bills for the solution of the agrarian problem, and the problems of labor, of food supply, and of finances.

You stand on the threshold of a hopeful future in which you shall be free and independent in determining and directing your destiny! Begin building a home of your own, ruled by law and order, in order to be a worthy member within the family of civilized nations! Sons and daughters of our homeland, unite as one man in the sacred task of building our homeland! The sweat and blood shed by our ancestors for this country demand this from us; our forthcoming generations oblige us to do this.

May God watch over thee

The Council of Elders of the Estonian National Council