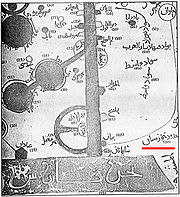 It was Estakhri who created the earliest known account of windmill
Windmill
A windmill is a machine which converts the energy of wind into rotational energy by means of vanes called sails or blades. Originally windmills were developed for milling grain for food production. In the course of history the windmill was adapted to many other industrial uses. An important...
s. His Arabic language works included Al-masaalik al-mamaalik (المسالك الممالك, "Traditions of Countries") and Suwar al-Aqaaleem ( صور الاقاليم, "Shapes of the Climes").