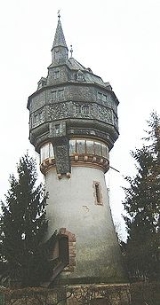 Encyclopedia
Eschersheim is a district or Stadtteil of Frankfurt am Main, Germany
Germany
Germany , officially the Federal Republic of Germany , is a federal parliamentary republic in Europe. The country consists of 16 states while the capital and largest city is Berlin. Germany covers an area of 357,021 km2 and has a largely temperate seasonal climate...
, with some 14,000 inhabitants. It is part of the Ortsbezirk Mitte-Nord, and is subdivided into the Stadtbezirke Eschersheim-Nord and Eschersheim-Süd.

Eschersheim, with a historical record beginning around 1000, is a district in the north of Frankfurt. It sits above the Nidda River
Nidda River
The Nidda is a right tributary of the Main river in Hesse.It springs from the Vogelsberg on the Taufstein mountain range near the town of Schotten, flows through the Niddastausee dam, and the towns of Nidda, Niddatal, Karben, and Bad Vilbel...
and on the opposite bank from Heddernheim
Heddernheim (Frankfurt am Main)
Heddernheim is a district or Stadtteil of Frankfurt am Main, Germany. It is part of the Ortsbezirk Nord-West, and is subdivided into the Stadtbezirke Heddernheim-Ost and Heddernheim-West. Heddernheim was first mentioned in documents in 801 as Phetterenheim...
. The old part of Eschersheim, "Alt-Eschersheim," is situated between the railroad and the public swimming pool. 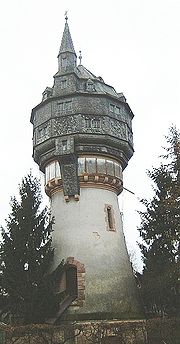 Around 1900 Eschersheim, previously a rural village without industry, became a wealthy residential area; it was incorporated into Frankfurt in 1910. In the twenties and thirties Walter Gropius
Walter Gropius
Walter Adolph Georg Gropius was a German architect and founder of the Bauhaus School who, along with Ludwig Mies van der Rohe and Le Corbusier, is widely regarded as one of the pioneering masters of modern architecture....
built the new settlement "Am Lindenbaum," around the water tower in the southern part of the district. In the fifties, more living complexes were built.