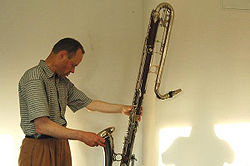 1968 Deuker received his first electric bass. At the beginning of the 1970s he founded with his brother Martin the political rock band Linkerton in Berlin. In 1979 was the first meeting of the Neue Deutsche Welle
Neue Deutsche Welle
Neue Deutsche Welle is a genre of German music originally derived from punk rock and New Wave music...
formation Ideal. 1980 the first album Ideal came out. 1981 the record producer Conny Plank
Conny Plank
Konrad "Conny" Plank was a German record producer and musician. He was born in Hütschenhausen. His creativity as a sound engineer and producer helped to shape some of the most important and innovative recordings of postwar European popular music, covering a wide range of genres including...
produced the album Der Ernst des Lebens. Tours and festivals followed include (Montreux Jazz Festival
Montreux Jazz Festival
The Montreux Jazz Festival is the best-known music festival in Switzerland and one of the most prestigious in Europe; it is held annually in early July in Montreux on the shores of Lake Geneva...
and Roskilde Festival
Roskilde Festival
Roskilde Festival is a festival held south of Roskilde in Denmark and is one of the six biggest annual music festivals in Europe . It was created in 1971 by two high school students, Mogens Sandfær and Jesper Switzer Møller, and promoter Carl Fischer...
1982) as well as various television appearances. Early 1983 the band felt apart.

1982, after attending a concert by Howard Johnson
Howard Johnson (jazz musician)
Howard Lewis Johnson in Montgomery, Alabama, is an American jazz musician known mainly for his work on tuba and baritone saxophone, although he also plays the bass clarinet, trumpet and other reed instruments....
, Deuker discovered his interest for the contrabass clarinet. Two years he needed to get a suitable copy of this unusually instrument.
Since the early 2000s he worked closely as a contrabass-clarinetist with jazz musicians.
2004 Deuker was also frontman, singer, guitarist and contrabass clarinetist of the avant-pop project "EU COMMISSION (Album Night Songs, at Below Recordings).
Since 2009 he is playing in the Deep Down Clarinet Duo with Theo Jörgensmann
Theo Jörgensmann
Theodor Franz Jörgensmann is a jazz and free-improvising Basset clarinet player and composer. He has been a professional musician since 1975.-Activities:...