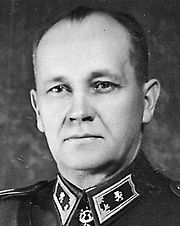 Major General Erkki Johannes Raappana (June 2, 1893, Oulujoki
Oulujoki
Oulujoki is a river in Oulu province, Finland.Its origin is Oulujärvi and, its watershed area covers a significant part of Kainuu region....
– September 14, 1962, Joensuu
Joensuu
Joensuu is a city and municipality in North Karelia in eastern Finland. It is located in the province of Eastern Finland and is part of North Karelia region. It was founded in 1848...
) was the commander of the 14th Division of the Finnish Army
Finnish Army
The Finnish Army is the land forces branch of the Finnish Defence Forces.Today's Army is divided into six branches: the infantry , field artillery, anti-aircraft artillery, engineers, signals, and materiel troops.-History of the Finnish Army:Between 1809 and 1917 Finland was an autonomous part of...
during the Second World War.

Among many of his known accomplishments, General Raappana was chosen to command the Finnish detachment - nicknamed "Group Raappana" ("Ryhmä Raappana" in Finnish
Finnish language
Finnish is the language spoken by the majority of the population in Finland Primarily for use by restaurant menus and by ethnic Finns outside Finland. It is one of the two official languages of Finland and an official minority language in Sweden. In Sweden, both standard Finnish and Meänkieli, a...
) - that was to stop the enemy in the very final Finnish-Soviet battle during the World War II
World War II
World War II, or the Second World War , was a global conflict lasting from 1939 to 1945, involving most of the world's nations—including all of the great powers—eventually forming two opposing military alliances: the Allies and the Axis...
. It was the Battle of Ilomantsi
Battle of Ilomantsi
The Battle of Ilomantsi was a part of the Continuation War . It was fought from July 26 to August 13, 1944, between Finland and the Soviet Union in area roughly 40 kilometers wide and 30 kilometers deep, near the Finnish-Soviet border, close to a small Finnish town of Ilomantsi, in North Karelia...
, fought during the Continuation War
Continuation War
The Continuation War was the second of two wars fought between Finland and the Soviet Union during World War II.At the time of the war, the Finnish side used the name to make clear its perceived relationship to the preceding Winter War...
(1941–1944).

The battle lasted from July 26 to August 13, 1944. It ended with a decisive Finnish victory, as the last major Soviet attack against Finland
Finland
Finland , officially the Republic of Finland, is a Nordic country situated in the Fennoscandian region of Northern Europe. It is bordered by Sweden in the west, Norway in the north and Russia in the east, while Estonia lies to its south across the Gulf of Finland.Around 5.4 million people reside...
was stopped here. Two elite Red Army
Red Army
The Workers' and Peasants' Red Army started out as the Soviet Union's revolutionary communist combat groups during the Russian Civil War of 1918-1922. It grew into the national army of the Soviet Union. By the 1930s the Red Army was among the largest armies in history.The "Red Army" name refers to...
divisions were completely routed after a week and a half of fighting, leaving behind over 3 200 Red Army soldiers dead, thousands wounded and missing, and over 100 pieces of heavy artillery and approximately 100 grenade launchers and the rest of the Soviet ordnance for the Finns to capture.

General Raappana was specialized and experienced particularly in forest warfare. He was awarded the most distinguished military award in Finland, the Mannerheim Cross
Mannerheim Cross
The Mannerheim Cross of Liberty is the highest Finnish military decoration. The medal was introduced after the Winter War and named after Field Marshal Carl Gustaf Emil Mannerheim...
.