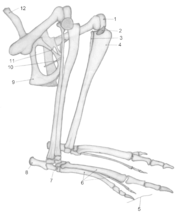 In modern marsupials the epipubic bones are often called "marsupial bones" because they support the mother's pouch ("marsupium" is Latin for "pouch"), but their presence on other groups of mammals indicates that this was not their original function, which some researchers think was to assist locomotion by supporting some of the muscles that flex
Flexion
In anatomy, flexion is a position that is made possible by the joint angle decreasing. The skeletal and muscular systems work together to move the joint into a "flexed" position. For example the elbow is flexed when the hand is brought closer to the shoulder...
the thigh.

The epipubic bones were first described in 1698 but their functions have remained unresolved. It has been suggested that they form part of a kinetic linkage stretching from the femur on one side to the ribs on the opposite side. This linkage is formed by a series of muscles: each epipubic bone is connected to the femur by the pectineus muscle
Pectineus muscle
The pectineus muscle is a flat, quadrangular muscle, situated at the anterior part of the upper and medial aspect of the thigh....
, and to the ribs and vertebrae by the pyramidalis
Pyramidalis muscle
The pyramidalis is a small and triangular muscle, anterior to the Rectus abdominis, and contained in the rectus sheath.-Attachments and actions:...
, rectus abdominis
Rectus abdominis muscle
The rectus abdominis muscle, also known as the "six pack", is a paired muscle running vertically on each side of the anterior wall of the human abdomen . There are two parallel muscles, separated by a midline band of connective tissue called the linea alba...
, and external
Abdominal external oblique muscle
The external oblique muscle is the largest and the most superficial of the three flat muscles of the lateral anterior abdomen.-Structure:...
and internal obliques
Abdominal internal oblique muscle
The internal oblique muscle is the intermediate muscle of the abdomen, lying just underneath the external oblique and just above the transverse abdominal muscle.-Structure:...
. The epipubic bones act as levers to stiffen the trunk.