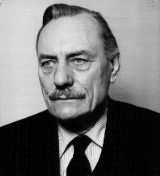 Overview
John Enoch Powell, MBE
Order of the British Empire
The Most Excellent Order of the British Empire is an order of chivalry established on 4 June 1917 by George V of the United Kingdom. The Order comprises five classes in civil and military divisions...
(16 June 1912 – 8 February 1998) was a British
British people
The British are citizens of the United Kingdom, of the Isle of Man, any of the Channel Islands, or of any of the British overseas territories, and their descendants...
politician, classical scholar, poet, writer, and soldier. He served as a Conservative Party
Conservative Party (UK)
The Conservative Party, formally the Conservative and Unionist Party, is a centre-right political party in the United Kingdom that adheres to the philosophies of conservatism and British unionism. It is the largest political party in the UK, and is currently the largest single party in the House...
MP (1950–74) and Minister of Health
Secretary of State for Health
Secretary of State for Health is a UK cabinet position responsible for the Department of Health.The first Boards of Health were created by Orders in Council dated 21 June, 14 November, and 21 November 1831. In 1848 a General Board of Health was created with the First Commissioner of Woods and...
(1960–63). He attained most prominence in 1968, when he made the controversial Rivers of Blood speech
Rivers of Blood speech
The "Rivers of Blood" speech was a speech criticising Commonwealth immigration, as well as proposed anti-discrimination legislation in the United Kingdom made on 20 April 1968 by Enoch Powell , the Conservative Member of Parliament for Wolverhampton South West...
in opposition to mass immigration from Commonwealth nations. For this, he was sacked from his position as Shadow Defence Secretary (1965–68) in the shadow cabinet
Shadow Cabinet
The Shadow Cabinet is a senior group of opposition spokespeople in the Westminster system of government who together under the leadership of the Leader of the Opposition form an alternative cabinet to the government's, whose members shadow or mark each individual member of the government...
of Edward Heath
Edward Heath
Sir Edward Richard George "Ted" Heath, KG, MBE, PC was a British Conservative politician who served as Prime Minister of the United Kingdom and as Leader of the Conservative Party ....
.

It is no accident that the Labour Party of 1964 should share this craving for autarchy, for economic self-sufficiency, with the pre-war Fascist régimes and the present-day Communist states. They are all at heart totalitarian.

In the end, the Labour party could cease to represent labour. Stranger historic ironies have happened than that.

Article for The Sunday Telegraph, citing the swing to the Conservatives in his constituency and others with large working-class electorates (18 October, 1964), from Simon Heffer, Like the Roman. The Life of Enoch Powell (Phoenix, 1999), p. 364.

Yes, I am a virus. I am the virus that kills socialists.

Replying to Harold Wilson's conference speech where he attacked "the virus of Powellism" (1 October, 1968).

As so often, the ordinary rank and file of the electorate have seen a truth, an important fact, which has escaped so many more clever people — the underlying value of that which is traditional, that which is prescriptive.