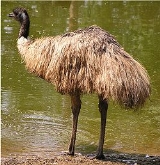 Overview
The Emu is the largest bird
Bird
Birds are feathered, winged, bipedal, endothermic , egg-laying, vertebrate animals. Around 10,000 living species and 188 families makes them the most speciose class of tetrapod vertebrates. They inhabit ecosystems across the globe, from the Arctic to the Antarctic. Extant birds range in size from...
native to Australia
Australia
Australia , officially the Commonwealth of Australia, is a country in the Southern Hemisphere comprising the mainland of the Australian continent, the island of Tasmania, and numerous smaller islands in the Indian and Pacific Oceans. It is the world's sixth-largest country by total area...
and the only extant member of the genus
Genus
In biology, a genus is a low-level taxonomic rank used in the biological classification of living and fossil organisms, which is an example of definition by genus and differentia...
Dromaius
Dromaius
Dromaius is a genus of ratite present in Australia. There is one extant species, Dromaius novaehollandiae commonly known as the Emu.In his original 1816 description of the emu, Louis Jean Pierre Vieillot used two generic names; first Dromiceius, then Dromaius a few pages later...
. It is the second-largest extant bird in the world by height, after its ratite
Ratite
A ratite is any of a diverse group of large, flightless birds of Gondwanan origin, most of them now extinct. Unlike other flightless birds, the ratites have no keel on their sternum—hence the name from the Latin ratis...
relative, the ostrich
Ostrich
The Ostrich is one or two species of large flightless birds native to Africa, the only living member of the genus Struthio. Some analyses indicate that the Somali Ostrich may be better considered a full species apart from the Common Ostrich, but most taxonomists consider it to be a...
. There are three subspecies of Emus in Australia. The Emu is common over most of mainland Australia, although it avoids heavily populated areas, dense forest, and arid areas.