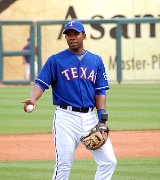 Encyclopedia
Elvis Augusto Andrus Torres (born August 26, 1988, in Maracay
Maracay
Maracay is a city in north-central Venezuela, near the Caribbean coast, and is the capital and most important city of the state of Aragua. Most of it falls under the jurisdiction of the Girardot Municipality. The population as per the 2001 census was 750,000...
, Venezuela
Venezuela
Venezuela , officially called the Bolivarian Republic of Venezuela , is a tropical country on the northern coast of South America. It borders Colombia to the west, Guyana to the east, and Brazil to the south...
) is a Major League Baseball
Major League Baseball
Major League Baseball is the highest level of professional baseball in the United States and Canada, consisting of teams that play in the National League and the American League...
shortstop
Shortstop
Shortstop, abbreviated SS, is the baseball fielding position between second and third base. Shortstop is often regarded as the most dynamic defensive position in baseball, because there are more right-handed hitters in baseball than left-handed hitters, and most hitters have a tendency to pull the...
for the Texas Rangers
Texas Rangers (baseball)
The Texas Rangers are a professional baseball team in the Dallas-Fort Worth Metroplex, based in Arlington, Texas. The Rangers are a member of the Western Division of Major League Baseball's American League, and are the reigning A.L. Western Division and A.L. Champions. Since , the Rangers have...
.

Entering , he was rated by Baseball America
Baseball America
Baseball America is a magazine which covers baseball at every level, with a particular focus on up-and-coming players in high school, college, Japan, and the minor leagues. It is currently published in the form of a bi-weekly newspaper, five annual reference book titles, a weekly podcast, and a...
as the No. 2 prospect in the Atlanta Braves
Atlanta Braves
The Atlanta Braves are a professional baseball club based in Atlanta, Georgia. The Braves are a member of the Eastern Division of Major League Baseball's National League. The Braves have played in Turner Field since 1997....
organization. In 2009, Andrus earned the Texas Rangers starting shortstop job at the age of 20.

Andrus was signed in 2005 at age 16 to a six-figure contract. He started the year with the Orlando Braves of the Gulf Coast League
Gulf Coast League
The Gulf Coast League is a minor league baseball league which operates in Florida. It is a Rookie League, with a season running from mid-June to late August. The season is 60 games long and teams in the league are divided into three divisions, East, North and South...
, and was promoted to Danville
Danville Braves
The Danville Braves are a minor league baseball team in Danville, Virginia, USA. They are an Advanced Rookie-level team in the Appalachian League and have been a farm team of the Atlanta Braves since 1993. The Braves play home games at American Legion Post 325 Field...
late in the season. He spent 2006 with Class-A Rome
Rome Braves
The Rome Braves are a Class-A minor league affiliate of the Atlanta Braves. In 2003, the team, previously known as the Macon Braves, moved from Macon, Georgia, to Rome, Georgia, 60 miles northwest of Atlanta....
, being named to the South Atlantic League
South Atlantic League
The South Atlantic League is a minor league baseball league based chiefly in the Southeastern United States, with the exception of three teams in the Mid-Atlantic States...
All-Star team.

In 2007 Andrus joined the Myrtle Beach Pelicans
Myrtle Beach Pelicans
The Myrtle Beach Pelicans are a minor league baseball team in Myrtle Beach, South Carolina. They are a Class A Advanced team in the Carolina League and the franchise is currently the farm team of the Texas Rangers. From their inaugural season until 2010, the Pelicans were an affiliate of the...
of the Carolina League
Carolina League
The Carolina League is a minor league baseball affiliation which operates in the South Atlantic Coast of the United States. Before 2002, it was classified as a "High A" league, indicating its status as a Class A league with the highest level of competition within that classification, and the fifth...
. During the midseason he was selected to the All-Star Futures Game
All-Star Futures Game
The All-Star Futures Game is an annual baseball exhibition game between a team of top minor league prospects from the United States and a team of prospects from other parts of the World...
; he was selected again for the Futures Game in 2008.

With Rangers shortstop Michael Young agreeing to move to third base in 2009, Andrus earned the starting job on opening day. He was the second-youngest player in the American League. As Andrus was only 20 years old, Texas signed veteran shortstop Omar Vizquel
Omar Vizquel
Omar Enrique Vizquel González , nicknamed "Little O", is a Venezuelan Major League Baseball shortstop and third baseman. Vizquel has played for the Seattle Mariners , the Cleveland Indians , the San Francisco Giants , the Texas Rangers and the Chicago White Sox...
for insurance.

Andrus stole his 20th base on July 28, 2009 in his rookie season. Andrus was the 10th player in major league history to steal 20 bases under the age of 21. The last player to do that was then-teammate Andruw Jones
Andruw Jones
Andruw Rudolf Jones is a Major League Baseball outfielder who is a free agent.Jones made his debut during the 1996 season. In the 1996 World Series, Jones became the youngest player to ever homered in the postseason...
in 1997 with the Atlanta Braves. Andrus was named to the 2010 American League All-Star
2010 Major League Baseball All-Star Game
The 2010 Major League Baseball All-Star Game was the 81st midseason exhibition between the All-Stars of the American League and the National League , the two leagues comprising Major League Baseball...
team as a reserve shortstop.

Andrus' older brother Erold Andrus played in the Independent Leagues in 2009 and 2010, as an outfielder. He previously played in the Yankees, Twins, and Tampa Bay Rays organizations.