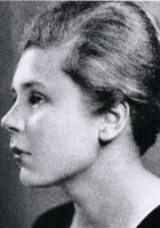 Overview
Elizabeth Bishop was an American poet and short-story writer. She was the Poet Laureate of the United States
Poet Laureate Consultant in Poetry to the Library of Congress
The Poet Laureate Consultant in Poetry to the Library of Congress—commonly referred to as the United States Poet Laureate—serves as the nation's official poet. During his or her term, the Poet Laureate seeks to raise the national consciousness to a greater appreciation of the reading and writing of...
from 1949 to 1950, a Pulitzer Prize winner
Pulitzer Prize for Poetry
The Pulitzer Prize in Poetry has been presented since 1922 for a distinguished volume of original verse by an American author. However, special citations for poetry were presented in 1918 and 1919.-Winners:...
in 1956 and a National Book Award
National Book Award
The National Book Awards are a set of American literary awards. Started in 1950, the Awards are presented annually to American authors for literature published in the current year. In 1989 the National Book Foundation, a nonprofit organization which now oversees and manages the National Book...
Winner for Poetry in 1970. Elizabeth Bishop House
Elizabeth Bishop House
The Elizabeth Bishop House, also known as the Bulmer House, is an historic single-family house that today is used as an artists' retreat in Great Village, Nova Scotia. The house is associated with Pulitzer Prize winning author Elizabeth Bishop who in her youth lived in the house each summer with...
is an artists' retreat in Great Village, Nova Scotia
Great Village, Nova Scotia
Great Village is a community of approximately 500 people located along Trunk 2 and the north shore of Cobequid Bay in Colchester County Nova Scotia...
dedicated to her memory. She is considered one of the most important and distinguished American poets of the 20th century.
Elizabeth Bishop, an only child, was born in Worcester, Massachusetts
Worcester, Massachusetts
Worcester is a city and the county seat of Worcester County, Massachusetts, United States. Named after Worcester, England, as of the 2010 Census the city's population is 181,045, making it the second largest city in New England after Boston....
. After her father, a successful builder, died when she was eight months old, Bishop’s mother became mentally ill and was institutionalized in 1916.

I am writing an response essay on this poet and I was wondering about her "First Death in Nova Scotia", has anyone read this and what are their though...
More
x