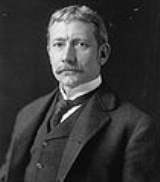 Overview
Elihu Root was an American
United States
The United States of America is a federal constitutional republic comprising fifty states and a federal district...
lawyer and statesman and the 1912 recipient of the Nobel Peace Prize
Nobel Peace Prize
The Nobel Peace Prize is one of the five Nobel Prizes bequeathed by the Swedish industrialist and inventor Alfred Nobel.-Background:According to Nobel's will, the Peace Prize shall be awarded to the person who...
. He was the prototype of the 20th century "wise man
The Wise Men
The Wise Men were a group of government officials and members of the East Coast foreign policy establishment who, beginning in the 1940s, developed the containment policy of dealing with the Communist bloc and crafted institutions and initiatives such as NATO, the World Bank, and the Marshall Plan...
", who shuttled between high-level government positions in Washington, D.C.
Washington, D.C.
Washington, D.C., formally the District of Columbia and commonly referred to as Washington, "the District", or simply D.C., is the capital of the United States. On July 16, 1790, the United States Congress approved the creation of a permanent national capital as permitted by the U.S. Constitution....
and private-sector legal practice in New York City
New York City
New York is the most populous city in the United States and the center of the New York Metropolitan Area, one of the most populous metropolitan areas in the world. New York exerts a significant impact upon global commerce, finance, media, art, fashion, research, technology, education, and...
.
Root was born in Clinton, New York
Clinton, Oneida County, New York
Clinton is a village in Oneida County, New York, United States. The population was 1,952 at the 2000 census. It was named for George Clinton, a royal governor of the colony of New York....
, to Oren Root I and Nancy Whitney Buttrick. His father was professor of mathematics at Hamilton College, where Elihu attended college; there he joined the Sigma Phi Society
Sigma Phi
The Sigma Phi Society was founded on 4 March 1827, on the campus of Union College as a part of the Union Triad in Schenectady, New York.It is the second oldest Greek fraternal organization in the United States, and the oldest in continuous existence...
, and was elected to the Phi Beta Kappa Society
Phi Beta Kappa Society
The Phi Beta Kappa Society is an academic honor society. Its mission is to "celebrate and advocate excellence in the liberal arts and sciences"; and induct "the most outstanding students of arts and sciences at America’s leading colleges and universities." Founded at The College of William and...
After graduation, Root taught for one year at the Rome (N.Y.) Free Academy.

What was Elihu Root's position on the Congo Free state?
More
x