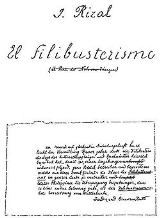 Overview
El filibusterismo also known by its English alternate title The Reign of Greed, is the second novel written by Philippine national hero José Rizal
José Rizal
José Protacio Rizal Mercado y Alonso Realonda , was a Filipino polymath, patriot and the most prominent advocate for reform in the Philippines during the Spanish colonial era. He is regarded as the foremost Filipino patriot and is listed as one of the national heroes of the Philippines by...
. It is the sequel to Noli Me Tangere
Noli Me Tangere (novel)
Noli Me Tangere is a novel by Filipino polymath José Rizal and first published in 1887 in Berlin, Germany. Early English translations used titles like An Eagle Flight and The Social Cancer, but more recent translations have been published using the original Latin title.Though originally written in...
and like the first book, was written in Spanish. It was first published in 1891 in Ghent, Belgium. Throughout the Philippines, the novel is read in senior high schools.
Thirteen years after leaving the Philippines, Crisostomo Ibarra returns as Simoun, a rich jeweler sporting a beard and blue-tinted glasses, and a confidant of the Captain-General.

Why didn't rizal create an epilogue for Fili?

Who is father camorra?

Name of the steamer where Simoun was aboard going to laguna?

Who are the characters in el filibusterismo in real life?
More
x