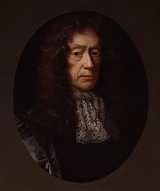 Edmund Waller, FRS (3 March 1606 – 21 October 1687) was an English
England
England is a country that is part of the United Kingdom. It shares land borders with Scotland to the north and Wales to the west; the Irish Sea is to the north west, the Celtic Sea to the south west, with the North Sea to the east and the English Channel to the south separating it from continental...
poet
Poet
A poet is a person who writes poetry. A poet's work can be literal, meaning that his work is derived from a specific event, or metaphorical, meaning that his work can take on many meanings and forms. Poets have existed since antiquity, in nearly all languages, and have produced works that vary...
and politician
Politician
A politician, political leader, or political figure is an individual who is involved in influencing public policy and decision making...
who sat in the House of Commons
House of Commons of England
The House of Commons of England was the lower house of the Parliament of England from its development in the 14th century to the union of England and Scotland in 1707, when it was replaced by the House of Commons of Great Britain...
at various times between 1624 and 1679.
Edmund Waller was the eldest son of Robert Waller of Coleshill
Coleshill, Buckinghamshire
Coleshill is a village and civil parish within Chiltern district in Buckinghamshire, England. It is near Amersham and just to the north of Beaconsfield....
, Herts
Hertfordshire
Hertfordshire is a ceremonial and non-metropolitan county in the East region of England. The county town is Hertford.The county is one of the Home Counties and lies inland, bordered by Greater London , Buckinghamshire , Bedfordshire , Cambridgeshire and...
, and Anne Hampden, his wife; thus he was first cousin to John Hampden
John Hampden
John Hampden was an English politician, the eldest son of William Hampden, of Hampden House, Great Hampden in Buckinghamshire, John Hampden (ca. 15951643) was an English politician, the eldest son of William Hampden, of Hampden House, Great Hampden in Buckinghamshire, John Hampden (ca. 15951643)...
. He was descended from the Waller family of Groombridge Place
Groombridge Place
Groombridge Place is a moated Manor house in the village of Groombridge near Tunbridge Wells, Kent, England. It has become a tourist attraction, noted for its formal gardens, vineyards and a bird of prey sanctuary. -History:...
, Kent. Early in his childhood his father moved the family to Beaconsfield
Beaconsfield
Beaconsfield is a market town and civil parish operating as a town council within the South Bucks district in Buckinghamshire, England. It lies northwest of Charing Cross in Central London, and south-east of the county town of Aylesbury...
.

Panegyric to My Lord Protector (or Panegyric on Cromwell).

Guarded with ships, and all our sea our own.

To My Lord of Falkland.

To man, that was in th' evening made,Stars gave the first delight;Admiring, in the gloomy shade,Those little drops of light.

That which her slender waist confinedShall now my joyful temples bind;No monarch but would give his crownHis arms might do what this has done.

My joy, my grief, my hope, my love,Did all within this circle move!

Go, lovely rose!Tell her that wastes her time and meThat now she knows,When I resemble her to thee,How sweet and fair she seems to be.

How small a part of time they shareThat are so wondrous sweet and fair!

Poets that lasting marble seekMust come in Latin or in Greek.