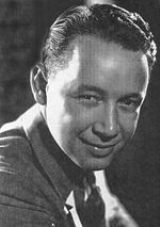 Encyclopedia
Eddie Acuff was an American
United States
The United States of America is a federal constitutional republic comprising fifty states and a federal district...
actor. His best-known recurring role is that of Mr. Beasley, the postman, in the Blondie
Blondie (film)
Blondie is a 1938 movie directed by Frank Strayer, based on the comic strip of the same name. The screenplay was written by Chic Young and Richard Flournoy....
movie series that starred Penny Singleton
Penny Singleton
Penny Singleton was an American film actress. Born Marianna Dorothy Agnes Letitia McNulty in Philadelphia, Pennsylvania she was the daughter of an Irish-American newspaperman Benny McNulty — from whom she received the nickname "Penny" because she was "as bright as a penny".During her sixty...
and Arthur Lake
Arthur Lake (actor)
Arthur Lake was an American actor known best for bringing Dagwood Bumstead, the bumbling husband of Blondie, to life in film, radio and television.-Early life and career:...
.

Born in Caruthersville, Missouri
Caruthersville, Missouri
Caruthersville is the most populous city and county seat of Pemiscot County, located along the Mississippi River in the bootheel of southeastern Missouri in the United States. The population was 6,760 at the 2000 census.-History:...
, Acuff was probably bitten by the acting bug through association with his maternal uncle, a performer on 19th century showboats along the Mississippi River
Mississippi River
The Mississippi River is the largest river system in North America. Flowing entirely in the United States, this river rises in western Minnesota and meanders slowly southwards for to the Mississippi River Delta at the Gulf of Mexico. With its many tributaries, the Mississippi's watershed drains...
. Before beginning his Hollywood film career in 1934, he performed in Broadway theatre
Broadway theatre
Broadway theatre, commonly called simply Broadway, refers to theatrical performances presented in one of the 40 professional theatres with 500 or more seats located in the Theatre District centered along Broadway, and in Lincoln Center, in Manhattan in New York City...
in the early-1930s. He died in Hollywood, California and is buried in Valhalla Memorial Park Cemetery
Valhalla Memorial Park Cemetery
Valhalla Memorial Park Cemetery is located at 10621 Victory Boulevard in North Hollywood, California.The cemetery has a special section called the Portal of the Folded Wings Shrine to Aviation that is the final resting place for a number of aviation pioneers — barnstormers, daredevils and...
.