Encyclopedia
EcosimPro is a simulation tool developed by Empresarios Agrupados A.I.E for modelling simple and complex physical processes that can be expressed in terms of Differential algebraic equations or Ordinary differential equations and Discrete event simulation
Discrete Event Simulation
In discrete-event simulation, the operation of a system is represented as a chronological sequence of events. Each event occurs at an instant in time and marks a change of state in the system...
.

This tool employs a set of libraries containing various types of components (mechanical, electrical, pneumatic, hydraulic, etc.) that can be reused to model any type of system.

It is used within ESA for propulsion systems analysis and is the recommended ESA analysis tool for ECLS systems.

The EcosimPro Tool Project began in 1989 with funds from the European Space Agency
European Space Agency
The European Space Agency , established in 1975, is an intergovernmental organisation dedicated to the exploration of space, currently with 18 member states...
(ESA) and with the goal of simulating environmental control and life support systems for manned spacecraft, such as the Hermes shuttle
Hermes (shuttle)
Hermes was a proposed spaceplane designed by the French Centre National d'Études Spatiales in 1975, and later by the European Space Agency. It was superficially similar to the US X-20. France proposed in January 1985 to go through with Hermes development under the auspices of the ESA. Hermes was...
.
The multidisciplinary nature of this modelling tool led to its use in many other disciplines, including fluid mechanics, chemical processing, control, energy, propulsion and flight dynamics. These complex applications have demonstrated that EcosimPro is very robust and ready for use in many other fields.

To familiarize yourself with the use of EcosimPro, first create a simple component to solve a differential equation. Although EcosimPro is designed to simulate complex systems, it can also be used independently of a physical system as if it were a pure equation solver. The example in this section illustrates this type of use. It solves the following differential equation to introduce a delay to variable x:

which is equivalent to

where x and y have a time dependence that will be defined in the experiment. Tau is datum provided given by the user; we will use a value of 0.6 seconds. This equation introduces a delay in the x variable with respect to y with value tau. To simulate this equation we will create an EcosimPro component with the equation in it.

The component to be simulated in EL is like thus:

One example of applied calculus could be the movement of a perfect pendulum (no friction taken into account). We would have the following data: the force of gravity ‘g’; the length of the pendulum ‘L’; and the pendulum’s mass ‘M’. As variables to be calculated we would have: the Cartesian position at each moment in time of the pendulum ‘x’ and ‘y’ and the tension on the wire of the pendulum ‘T’. The equations that define the model would be:

- Projecting the length of the cable on the Cartesian axes and applying Pythagoras’ theorem we get:

By decomposing force in Cartesians we get

To obtain the differential equations we can convert:

is the first derivative of the position and equals the speed.

is the second derivative of the position and equals the acceleration)

This example can be found in the DEFAULT_LIB library as “pendulum.el”: 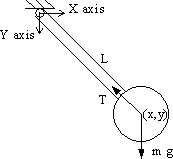 The last two equations respectively express the accelerations, x’’ and y’’, on the X and Y axes