As of the census
Census
A census is the procedure of systematically acquiring and recording information about the members of a given population. It is a regularly occurring and official count of a particular population. The term is used mostly in connection with national population and housing censuses; other common...
of 2000, there were 24,919 people, 9,448 households, and 6,556 families residing in the township. The population density
Population density
Population density is a measurement of population per unit area or unit volume. It is frequently applied to living organisms, and particularly to humans...
was 1,592.8 people per square mile (614.8/km²). There were 9,880 housing units at an average density of 631.5 per square mile (243.8/km²). The racial makeup of the township was 74.42% White, 8.90% African American, 0.20% Native American, 9.55% Asian, 0.12% Pacific Islander, 4.61% from other races
Race (United States Census)
Race and ethnicity in the United States Census, as defined by the Federal Office of Management and Budget and the United States Census Bureau, are self-identification data items in which residents choose the race or races with which they most closely identify, and indicate whether or not they are...
, and 2.20% from two or more races. Hispanic or Latino of any race were 14.28% of the population. However, there is a significant population of undocumented Hispanic immigrants in the thousands which is not captured by census counts. School studies show that up to 20% of the total population in the school system is made up of undocumented immigrants.

There were 9,448 households out of which 34.2% had children under the age of 18 living with them, 55.6% were married couples
Marriage
Marriage is a social union or legal contract between people that creates kinship. It is an institution in which interpersonal relationships, usually intimate and sexual, are acknowledged in a variety of ways, depending on the culture or subculture in which it is found...
living together, 9.6% had a female householder with no husband present, and 30.6% were non-families. 24.6% of all households were made up of individuals and 6.6% had someone living alone who was 65 years of age or older. The average household size was 2.61 and the average family size was 3.12.

The median income for a household in the township was $63,616, and the median income for a family was $73,461. Males had a median income of $50,875 versus $35,260 for females. The per capita income
Per capita income
Per capita income or income per person is a measure of mean income within an economic aggregate, such as a country or city. It is calculated by taking a measure of all sources of income in the aggregate and dividing it by the total population...
for the township was $28,695. About 2.8% of families and 5.3% of the population were below the poverty line, including 4.3% of those under age 18 and 8.1% of those age 65 or over.

In the late 1990s, the "Hightstown Bypass" (Route 133) was constructed. It starts at County Route 571
County Route 571 (New Jersey)
County Route 571, abbreviated CR 571, is a county highway in the U.S. state of New Jersey. The highway extends from Route 37 in Toms River Township to Route 27 in the Borough of Princeton.-Ocean County:...
and terminates at 33. The entire highway is in East Windsor; there is a half-diamond interchange with One Mile Road, and a three-quarter cloverleaf interchange
Cloverleaf interchange
A cloverleaf interchange is a two-level interchange in which left turns, reverse direction in left-driving regions, are handled by ramp roads...
with U.S. Route 130. Both ends of the bypass are handled with traffic signals instead of grade separated interchanges. The township also houses a 5-lane toll gate for Exit 8 of the New Jersey Turnpike
New Jersey Turnpike
The New Jersey Turnpike is a toll road in New Jersey, maintained by the New Jersey Turnpike Authority. According to the International Bridge, Tunnel and Turnpike Association, the Turnpike is the nation's sixth-busiest toll road and is among one of the most heavily traveled highways in the United...
(Interstate 95
Interstate 95 in New Jersey
Interstate 95 is a major Interstate Highway that traverses the full extent of the East Coast of the United States, from Florida to Maine...
).

At the present time, the Turnpike is being widened from three lanes to a six-lane turnpike. This is part of a major widening project that would extend the "dual-dual" roadways to Exit 6 (Mansfield Township
Mansfield Township, Burlington County, New Jersey
-Demographics:As of the census of 2000, there were 5,090 people, 2,077 households, and 1,561 families residing in the township. The population density was 234.3 people per square mile . There were 2,122 housing units at an average density of 97.7 per square mile...
) from its current end at Exit 8A (Monroe Township
Monroe Township, Middlesex County, New Jersey
Monroe Township is a Township in Middlesex County, New Jersey, United States. As of the United States 2000 Census, the township population was 27,999. Monroe was incorporated as a township by an Act of the New Jersey Legislature on April 9, 1838, from portions of South Amboy Township, based on the...
). This project is anticipated to be finished by 2014.

On January 1, 2007, the New Jersey Turnpike Authority announced its plans for Exit 8. Prior to this plan being released, some thought that a new Exit 8 would connect directly with the Hightstown Bypass. There seems to be ample space (between mile markers 67.89 and 68.12) to build a new interchange because there's a large piece of land that would accommodate a toll gate and interchange ramps for 133. The plan that was released indicated that the current Interchange 8 will be demolished and replaced with a new interchange which would end at the intersection with Route 33, Milford Road, and the Hightstown Bypass (on the east side of the expressway in lieu of the west). It would also grant direct access to the bypass (without going through any traffic lights), as well as to 33 using a grade separated interchange. The new toll gate would also feature a total of 12 lanes at the gate. However, the interchange and the toll gate would run near some residential houses located right off of 33, and would disturb Twin Rivers
Twin Rivers, New Jersey
Twin Rivers is a census-designated place and unincorporated area located within East Windsor Township, in Mercer County, New Jersey. As of the United States 2000 Census, the CDP population was 7,422...
. The Authority released 3 configuration options at the intersection of Milford, 33, and the bypass. 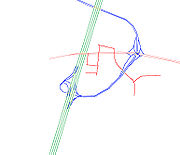 Members of the East Windsor Township Council are Mayor
Mayor
In many countries, a Mayor is the highest ranking officer in the municipal government of a town or a large urban city....
Janice S. Mironov, Deputy Mayor
Deputy Mayor
Deputy mayor is an elective or appointive office of the second-ranking official in many local governments. Many elected deputy mayors are members of the city council who are given the title and serve as acting mayor in the mayor's absence...
Perry M. Shapiro, Walter T. Daniels, Hector Duke, Marc Lippman, Alan Rosenberg and Marsha Weinstein.

The East Windsor Police Department, Located on One Mile Road, is led by Police Chief William Spain, and employs 37 Uniformed Patrol and Traffic Enforcement Officers, 9 Detectives, 7 Dispatchers and Communications Officers and one Animal Control Officer, for a total of 47 Sworn Police Officers.

East Windsor Township is in the 4th Congressional district.

East Windsor Township is in the

Notable current and former residents of East Windsor Township include: