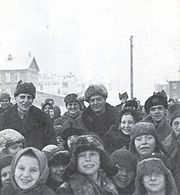 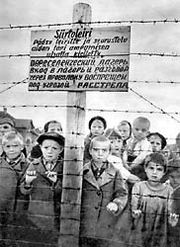 East Karelian concentration camps were special internment camps in the areas of the Soviet Union
Soviet Union
The Soviet Union , officially the Union of Soviet Socialist Republics , was a constitutionally socialist state that existed in Eurasia between 1922 and 1991....
occupied by Finnish military administration
Finnish military administration in Eastern Karelia, 1941–1944
Finnish military administration in Eastern Karelia was an interim administrative system established in those areas of the Karelo-Finnish Soviet Socialist Republic of the Soviet Union which were occupied by the Finnish army during the Continuation War. The military administration was set up on July...
during the Continuation War
Continuation War
The Continuation War was the second of two wars fought between Finland and the Soviet Union during World War II.At the time of the war, the Finnish side used the name to make clear its perceived relationship to the preceding Winter War...
. These camps were organized by the armed forces supreme commander Carl Gustaf Emil Mannerheim
Carl Gustaf Emil Mannerheim
Baron Carl Gustaf Emil Mannerheim was the military leader of the Whites in the Finnish Civil War, Commander-in-Chief of Finland's Defence Forces during World War II, Marshal of Finland, and a Finnish statesman. He was Regent of Finland and the sixth President of Finland...
. The camps were not meant to annihilate the original population, but to in future exchange them for Finnic population
Finnic peoples
The Finnic or Fennic peoples were historic ethnic groups who spoke various languages traditionally classified as Finno-Permic...
from rest of Russia. The mortality rate
Mortality rate
Mortality rate is a measure of the number of deaths in a population, scaled to the size of that population, per unit time...
of civilians was high due famine
Famine
A famine is a widespread scarcity of food, caused by several factors including crop failure, overpopulation, or government policies. This phenomenon is usually accompanied or followed by regional malnutrition, starvation, epidemic, and increased mortality. Every continent in the world has...
and disease
Disease
A disease is an abnormal condition affecting the body of an organism. It is often construed to be a medical condition associated with specific symptoms and signs. It may be caused by external factors, such as infectious disease, or it may be caused by internal dysfunctions, such as autoimmune...
s.

A significant number of Soviet civilians were interred in concentration camps. These were Russian women, young children, and the elderly as almost all of the working age male and female population was either drafted or evacuated: only ⅓ of the original population of 470,000 remained in East Karelia when the Finnish army arrived, and a half of them were Karelians. About 30% (24,000) of the remaining Russian population were confined in camps, 6,000 of them were Soviet refugees captured when awaiting transportation over Lake Onega
Lake Onega
Lake Onega is a lake in the north-west European part of Russia, located on the territory of Republic of Karelia, Leningrad Oblast and Vologda Oblast. It belongs to the basin of Baltic Sea, Atlantic Ocean, and is the second largest lake in Europe after Lake Ladoga...
, and 3,000 from the southern side of the River Svir
Svir River
Svir is a river in the north-east of Leningrad Oblast, Russia. It flows from Lake Onega west to Lake Ladoga, thus connecting the two largest lakes of Europe. It is the largest river flowing into Lake Ladoga....
, allegedly to secure the area behind the front lines against partisan attacks. The first of the camps were set up on 24 October 1941 in Petrozavodsk
Petrozavodsk
Petrozavodsk is the capital city of the Republic of Karelia, Russia. It stretches along the western shore of the Lake Onega for some . The city is served by Petrozavodsk Airport. Municipally, it is incorporated as Petrozavodsky Urban Okrug . Population:...
. During the spring and summer of 1942, 3,500 detainees died of malnutrition. During the last half of 1942 the number of detainees dropped quickly to 15,000 as people were released to their homes or were resettled to the "safe" villages, and 500 more people died during the last two years of war, as the food shortages were alleviated. During the following years, the Finnish authorities detained several thousand more civilians from areas with reported partisan activity, but as the releases continued the total number of detainees remained at 13,000–14,000. The total number of deaths among the camp inmates is estimated at 4,000–7,000, mostly from hunger during the spring and summer of 1942.

The first camp was set up on 24 October 1941, in Petrozavodsk
Petrozavodsk
Petrozavodsk is the capital city of the Republic of Karelia, Russia. It stretches along the western shore of the Lake Onega for some . The city is served by Petrozavodsk Airport. Municipally, it is incorporated as Petrozavodsky Urban Okrug . Population:...
. The two largest groups were 6,000 Russian refugees and 3,000 inhabitants from the southern bank of River Svir forcibly evacuated because of the closeness of the front line. Around 4,000 of the prisoners perished due to malnourishment, 90% of them during the spring and summer 1942.

Population in the Finnish camps: