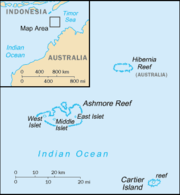 East Island is one of three islet
Islet
An islet is a very small island.- Types :As suggested by its origin as islette, an Old French diminutive of "isle", use of the term implies small size, but little attention is given to drawing an upper limit on its applicability....
s on Ashmore Reef. It is located at 12º15'S 123º05'E, about midway between Australia and Timor. It is often referred to as East Islet, a name that is used, for example, in The World Factbook
The World Factbook
The World Factbook is a reference resource produced by the Central Intelligence Agency of the United States with almanac-style information about the countries of the world. The official paper copy version is available from the National Technical Information Service and the Government Printing Office...
; the islet's gazetted name is, however, East Island.