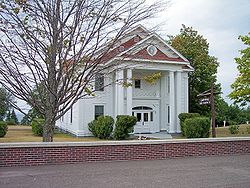 Eagle River is an unincorporated community in the U.S. state
U.S. state
A U.S. state is any one of the 50 federated states of the United States of America that share sovereignty with the federal government. Because of this shared sovereignty, an American is a citizen both of the federal entity and of his or her state of domicile. Four states use the official title of...
of Michigan
Michigan
Michigan is a U.S. state located in the Great Lakes Region of the United States of America. The name Michigan is the French form of the Ojibwa word mishigamaa, meaning "large water" or "large lake"....
and is the county seat
County seat
A county seat is an administrative center, or seat of government, for a county or civil parish. The term is primarily used in the United States....
of Keweenaw County
Keweenaw County, Michigan
-Demographics:As of the census of 2000, there were 2,301 people, 998 households, and 604 families residing in the county. The population density was 4 people per square mile . There were 2,327 housing units at an average density of 4 per square mile...
.

The community is on M-26
M-26 (Michigan highway)
M-26 is a state trunkline highway in the U.S. state of Michigan, running from two miles east of Rockland to its junction with US Highway 41 in Copper Harbor. It generally runs southwest-to-northeast in the western half or Michigan's Upper Peninsula...
on the north side of the Keweenaw Peninsula
Keweenaw Peninsula
The Keweenaw Peninsula is the northern-most part of Michigan's Upper Peninsula. It projects into Lake Superior and was the site of the first copper boom in the United States. As of the 2000 census, its population was roughly 43,200...
, which projects into Lake Superior
Lake Superior
Lake Superior is the largest of the five traditionally-demarcated Great Lakes of North America. It is bounded to the north by the Canadian province of Ontario and the U.S. state of Minnesota, and to the south by the U.S. states of Wisconsin and Michigan. It is the largest freshwater lake in the...
. It is about 27 miles northeast of Houghton
Houghton, Michigan
Houghton is a city in the U.S. state of Michigan's Upper Peninsula and largest city in the Copper Country on the Keweenaw Peninsula. As of the 2010 census, the city population was 7,708. It is the county seat of Houghton County...
and is situated in the northwest corner of Houghton Township
Houghton Township, Michigan
Houghton Township is a civil township of Keweenaw County in the U.S. state of Michigan. The population was 204 at the 2000 census. The township includes a portion of the Keweenaw Peninsula and also the northern half of Isle Royale.-Geography:...
on the mouth of the Eagle River
Eagle River (Michigan)
The Eagle River is a small river on the Keweenaw Peninsula of the U.S. state of Michigan. The river flows into Lake Superior in the community of Eagle River...
at 47°24′50"N 88°17′45"W. The ZIP code
ZIP Code
ZIP codes are a system of postal codes used by the United States Postal Service since 1963. The term ZIP, an acronym for Zone Improvement Plan, is properly written in capital letters and was chosen to suggest that the mail travels more efficiently, and therefore more quickly, when senders use the...
is 49950.

Eagle River was a boom town of the copper mining era in the Keweenaw. Copper was discovered in 1845 at in the Cliff Range nearby, the so-called "Cliff Lode". The land of the Eagle River community had been leased by the Keweenaw Copper Company in 1843. It was later platted by the Phoenix Company and sold as individual lots. The first postmaster was named on October 24, 1845. It was part of Houghton County
Houghton County, Michigan
-National protected areas:* Keweenaw National Historical Park * Ottawa National Forest -Demographics:As of the census of 2000, there were 36,016 people, 13,793 households, and 8,137 families residing in the county. The population density was 36 people per square mile . There were 17,748 housing...
until Keweenaw County was organized in 1861. The profitability of the area's copper mines had begun to decline sharply by around 1870. Without copper traffic, the Eagle River harbor went unused and quickly became full of silt.

The decommissioned Eagle River Lighthouse is on the west bank of the river on a sand bluff overlooking Lake Superior, although the view is partially obscured by condominiums.
The source of this article is wikipedia, the free encyclopedia.  The text of this article is licensed under the GFDL.