Encyclopedia
The Panhard
Panhard
Panhard is currently a French manufacturer of light tactical and military vehicles. Its current incarnation was formed by the acquisition of Panhard by Auverland in 2005. Panhard had been under Citroën ownership, then PSA , for 40 years...
ERC 90 (Engin de Reconnaissance à Canon de 90 mm) is a French six-wheeled armoured all terrain vehicle which is highly mobile and amphibious with an option of being NBC
CBRN
CBRN is an initialism for chemical, biological, radiological, and nuclear. It is used to refer to situations in which any of these four hazards have presented themselves. The term CBRN is a replacement for the cold war term NBC , which had replaced the term ABC that was used in the fifties...
-proof. While various models were tested, only two versions of the ERC were developed and produced: the Lynx and the Sagaie. The only difference between the two versions being the type of main cannon mounted in the turret. Sagaie means Assegai
Assegai
An assegai or assagai is a pole weapon used for throwing or hurling, usually a light spear or javelin made of wood and pointed with iron.-Iklwa:...
or Spear
Spear
A spear is a pole weapon consisting of a shaft, usually of wood, with a pointed head.The head may be simply the sharpened end of the shaft itself, as is the case with bamboo spears, or it may be made of a more durable material fastened to the shaft, such as flint, obsidian, iron, steel or...
in French.

The Sagaie is originally a private-export project, the ERC 90 wheeled armoured vehicles were developed by Panhard
Panhard
Panhard is currently a French manufacturer of light tactical and military vehicles. Its current incarnation was formed by the acquisition of Panhard by Auverland in 2005. Panhard had been under Citroën ownership, then PSA , for 40 years...
in the last half of the 1970s as successor to its highly successful four wheel AML
AML
AML may refer to:* AML, stage name of Canadian TV producer, TV host and singer Anne-Marie Losique* Academia Mexicana de la Lengua, or Mexican Academy of Language, a national academy in Mexico responsible for regulating the Spanish language...
and M3 armoured vehicles.

The ERC and VCR are a family of six wheel armoured reconnaissance vehicles, the ERC being the cannon armed turret model and the VCR
Panhard VCR
The Panhard VCR is a light armored personnel carrier designed by Panhard for the export market and later used by several countries...
being the armoured personnel carrier version. ERC is the French abbreviation of term Engin de Reconnaissance Canon, or Gun-armed Reconnaissance Vehicle. The ERC shares many components of the VCR vehicles. Two main versions of the ERC were developed: the first model being the ERC F1 90 Lynx followed by the ERC F4 90 Sagaie. The Lynx appearing about 1977 and the Sagaie following approximately two years later in 1979. The Lynx was developed primarily as an armoured reconnaissance vehicle. The Sagaie was also a primary armoured reconnaissance vehicle, with the added secondary role of tank-destroyer. Panhard purposed in 1977 both the ERC and the VCR vehicles to the French Army
French Army
The French Army, officially the Armée de Terre , is the land-based and largest component of the French Armed Forces.As of 2010, the army employs 123,100 regulars, 18,350 part-time reservists and 7,700 Legionnaires. All soldiers are professionals, following the suspension of conscription, voted in...
, but lost the largest contract to a four wheeled armoured vehicle offered by Saviem
Renault
Renault S.A. is a French automaker producing cars, vans, and in the past, autorail vehicles, trucks, tractors, vans and also buses/coaches. Its alliance with Nissan makes it the world's third largest automaker...
with its VAB and the cannon armed reconnaissance vehicle requirement to a vehicle offered by GIAT
Nexter
Nexter is a French government-owned weapons manufacturer.-Products:...
the AMX 10 RC
AMX 10 RC
The AMX-10RC is a wheeled recon vehicle and tank destroyer built by GIAT. Over 300 are in service in the French Army. 120 additional vehicles were sold to Morocco and Qatar ....
and also lost a much smaller order for the French Mobile Gendarmerie
Mobile Gendarmerie
The Mobile Gendarmerie is a subdivision of the French Gendarmerie. The Mobile Gendarmerie is the inheritor of the traditions of the gendarmerie's historic infantry component. Specific anti-riot units of the Gendarmerie date back to the beginning of the 19th century...
to the Saviem VBC-90
VBC-90
The VBC-90 is a 6x6 armoured car equipped with a 90 mm high velocity gun in a GIAT TS 90 rotating turret.It equips the armoured squadron of the Mobile Gendarmerie, with 32 units built....
. But Panhard later found success for both VRC and ERC as a private project in the world export market, and later with the ERC version with orders from the French Army, which had at first rejected the Panhard contender.

The first production orders for the ERC 90 F1 Lynx, was an order for 36 in October 1979 from Argentina, for employment by its Marines to patrol the long border between Argentina and Chile. The second large order was from Mexico for 42 Lynxs in early 1981. Both countries ordered the ERC Lynx version, because of its ability to elevate or depress its 90mm cannon over a wider range for operations in steep mountain terrain.

Further export orders followed. Both nations also appreciated the all terrain mobility of the ERC 90 F1 Lynx which is enhanced by the capability to raise or lower the central pair of wheels depending on terrain condition, especially in sandy or muddy ground. All versions of the ERC are also equipped with two hydrojets behind the rear wheels and require no preparation for amphibious operations.

Shortly after the ERC 90 F1 Lynx had been built for export, Panhard recognised the need for a cost effective light armoured vehicle that could defeat more modern main battle tanks (MBT), like the Russian T-72 which was being exported to many nations. They developed a turret in which they mounted the long barrel F4 90 mm smooth bore cannon developed by the French-government defence firm GIAT
Giat
Giat is a commune in the Puy-de-Dôme department in Auvergne in central France.-Geography:The Chavanon flows southeastward through the south-western part of the commune.-References:*...
and designated the vehicle the ERC 90 F4 Sagaie. Unlike the Lynx version which could only fire medium velocity HEAT
Heat
In physics and thermodynamics, heat is energy transferred from one body, region, or thermodynamic system to another due to thermal contact or thermal radiation when the systems are at different temperatures. It is often described as one of the fundamental processes of energy transfer between...
rounds in the anti-tank role, which lacked the penetration to defeat the more modern MBTs, the Sagaie could fire armour piercing fin stabilised discard sabot rounds (APFS-DS) at a much higher velocity than the Lynx's F1 90 cannon and which at 2000 meters GIAT and Panhard both claimed would enable the Sagaie to defeat the heavy armour threat of the 1980s. For a while, GIAT engineers, were vexed with finding a suitable muzzle brake for the Sagaie which would not interferer with the firing of APFS-DS rounds, but finally found a suitable solution with the fitting of a muzzle brake design from the older AMX-13 light tank.

The Ivory Coast was the first export customer, ordering five Sagaies to replace its outdated AMX-13 light tanks. At this time period, the French Army was organising the Fast Deployment Force (FDF) for overseas military missions. Mainly in Africa or the Middle East. The main core of the FDF would be French Army's 9th Marine Infantry Division and the French Army's 11th Parachute Division. To enable the new FDF to be "more muscular" a new unit was activated, the 31st Heavy Half Brigade (31 DBL) of two regiments. One regiment was to be armed with armoured vehicle's mounting the HOT wire guided missile and the other a cannon armed light armoured vehicle that could provide both reconnaissance and a limited tank killing role.

The French Army had at first planned on equipping the later regiment with the AMX-10RC, but were told that this vehicle was not suitable due to weight and size for transport by the French Air Force Transall C-160
Transall C-160
|-See also:-References:* Taylor, John W. R. Jane's All The World's Aircraft 1982-83. London:Jane's Yearbooks, 1982. ISBN 0-7106-0748-2.-External links:*...
or its allies Hercules C-130 aircraft. In addition most of the bridges in Africa had only a 6 to 8 ton load bearing ability. So instead of the larger AMX-10RC, which was already in service with the French Army, the French Army Staff took the surprise step in December 1980 of ordering the Panhard ERC 90 F4 Sagaie for the future FDF. And to date the Sagaie has proved very useful for the French Army in its African bases and even in urban conditions during the Siege of Sarajevo
Siege of Sarajevo
The Siege of Sarajevo is the longest siege of a capital city in the history of modern warfare. Serb forces of the Republika Srpska and the Yugoslav People's Army besieged Sarajevo, the capital city of Bosnia and Herzegovina, from 5 April 1992 to 29 February 1996 during the Bosnian War.After Bosnia...
. The last known combat use of the Sagaie was with French Forces stationed in the Ivory Coast on a peace keeping mission, between the two rival factions. In 1982 the ERC 90 F1 Lynxs of Argentina Marines saw combat in the Falkland Islands
Falkland Islands
The Falkland Islands are an archipelago in the South Atlantic Ocean, located about from the coast of mainland South America. The archipelago consists of East Falkland, West Falkland and 776 lesser islands. The capital, Stanley, is on East Falkland...
in the defence of Port Stanley. 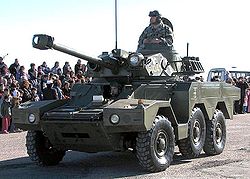