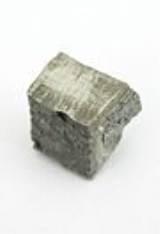 Overview
Dysprosium is a chemical element
Chemical element
A chemical element is a pure chemical substance consisting of one type of atom distinguished by its atomic number, which is the number of protons in its nucleus. Familiar examples of elements include carbon, oxygen, aluminum, iron, copper, gold, mercury, and lead.As of November 2011, 118 elements...
with the symbol Dy and atomic number
Atomic number
In chemistry and physics, the atomic number is the number of protons found in the nucleus of an atom and therefore identical to the charge number of the nucleus. It is conventionally represented by the symbol Z. The atomic number uniquely identifies a chemical element...
66. It is a rare earth element
Rare earth element
As defined by IUPAC, rare earth elements or rare earth metals are a set of seventeen chemical elements in the periodic table, specifically the fifteen lanthanides plus scandium and yttrium...
with a metallic silver luster. Dysprosium is never found in nature as a free element, though it is found in various minerals, such as xenotime
Xenotime
Xenotime is a rare earth phosphate mineral, whose major component is yttrium orthophosphate . It forms a solid solution series with chernovite- and therefore may contain trace impurities of arsenic, as well as silicon dioxide and calcium...
. Naturally occurring dysprosium is composed of 7 isotope
Isotope
Isotopes are variants of atoms of a particular chemical element, which have differing numbers of neutrons. Atoms of a particular element by definition must contain the same number of protons but may have a distinct number of neutrons which differs from atom to atom, without changing the designation...
s, the most abundant of which is 164Dy.

What is dysprosium natural state?

Is it used in industry
More
x