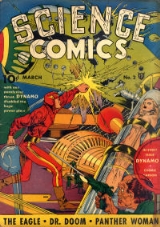 Encyclopedia
Dynamo is a fictional superhero
Superhero
A superhero is a type of stock character, possessing "extraordinary or superhuman powers", dedicated to protecting the public. Since the debut of the prototypical superhero Superman in 1938, stories of superheroes — ranging from brief episodic adventures to continuing years-long sagas —...
that appeared in comic books published by Fox Feature Syndicate
Fox Feature Syndicate
Fox Feature Syndicate was a comic book publisher from early in the period known to fans and historians as the Golden Age of Comic Books. Founded by entrepreneur Victor S...
. He originally appeared in Science Comics #1 (February 1940) under the name Electro. He appeared for the first time as Dynamo in Science Comics #2 (March 1940).

Jim Andrews is a young research scientist who is caught between two giant electrodes while conducting an experiment. He finds that the accident has given him the power to control electricity, which he can use to create force fields, shoot bolts of electricity from his hands, or fly through the air. If he uses his powers for too long, he can recharge by holding onto an electrical source. Deciding to call himself Electro, Jim puts on a helmet and cape to fight crime. He later changes his name to Dynamo, which he uses for the rest of his career.

Dynamo was a regular feature in Fox's Science Comics and Weird Comics, occasionally as the lead feature. His last appearance was in Weird Comics #19 (November 1941).