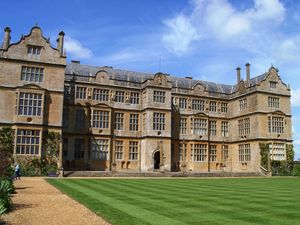 A Dutch gable or Flemish gable is a gable
Gable
A gable is the generally triangular portion of a wall between the edges of a sloping roof. The shape of the gable and how it is detailed depends on the structural system being used and aesthetic concerns. Thus the type of roof enclosing the volume dictates the shape of the gable...
whose sides have a shape made up of one or more curves and has a pediment
Pediment
A pediment is a classical architectural element consisting of the triangular section found above the horizontal structure , typically supported by columns. The gable end of the pediment is surrounded by the cornice moulding...
at the top. The gable may be an entirely decorative projection above a flat section of roof line, or may be the termination of a roof, like a normal gable (the picture of Montacute House, right, shows both types). The preceding is the strict definition, but the term is sometimes used more loosely, though the stepped gable
Crow-stepped gable
A Stepped gable, Crow-stepped gable, or Corbie step is a stair-step type of design at the top of the triangular gable-end of a building...
should be distinguished from it. The term "Dutch gable" is also used in America and Australasia to refer to a gablet roof
Gablet roof
A gablet roof or Dutch gable is a roof with a small gable at the top of a hip roof. The term Dutch gable is also used to mean a gable with parapets....
.

Examples of Dutch-gabled buildings can be found in historic cities across Europe. In Potsdam
Potsdam
Potsdam is the capital city of the German federal state of Brandenburg and part of the Berlin/Brandenburg Metropolitan Region. It is situated on the River Havel, southwest of Berlin city centre....
, Germany
Germany
Germany , officially the Federal Republic of Germany , is a federal parliamentary republic in Europe. The country consists of 16 states while the capital and largest city is Berlin. Germany covers an area of 357,021 km2 and has a largely temperate seasonal climate...
, 150 red brick houses featuring steep Dutch gables form part of the city's Dutch Quarter, while in Bruges
Bruges
Bruges is the capital and largest city of the province of West Flanders in the Flemish Region of Belgium. It is located in the northwest of the country....
, Belgium
Belgium
Belgium , officially the Kingdom of Belgium, is a federal state in Western Europe. It is a founding member of the European Union and hosts the EU's headquarters, and those of several other major international organisations such as NATO.Belgium is also a member of, or affiliated to, many...
, a wide range of buildings featuring Dutch gables can be found. The style also spread beyond Europe, for example Barbados is well known for the Dutch gables on its historic buildings. Dutch settlers in South Africa
South Africa
The Republic of South Africa is a country in southern Africa. Located at the southern tip of Africa, it is divided into nine provinces, with of coastline on the Atlantic and Indian oceans...
also brought with them building styles from Holland which included the use of prominent Dutch gables but adjusted to the Western Cape region where the style became known as Cape Dutch architecture
Cape Dutch architecture
-Introduction:Cape Dutch architecture is an architectural style found in the Western Cape of South Africa. The style was prominent in the early days of the Cape Colony, and the name derives from the fact that the initial settlers of the Cape were primarily Dutch...
.

The formation of Dutch gables requires careful detailing, to weatherproof the junction of the roof with the inner face of the Dutch gable wall with a flashing (weatherproofing)
Flashing (weatherproofing)
Flashing refers to thin continuous pieces of sheet metal or other impervious material installed to prevent the passage of water into a structure from an angle or joint...
.
To the left is an example from northern France, Arras
Arras
Arras is the capital of the Pas-de-Calais department in northern France. The historic centre of the Artois region, its local speech is characterized as a Picard dialect...
, where Flemish culture had a strong architectural impact. 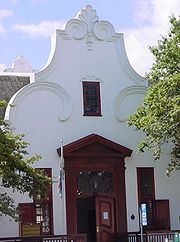