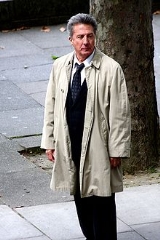 Overview
Dustin Lee Hoffman is an American actor with a career in film, television, and theatre since 1960. He has been known for his versatile portrayals of antiheroes and vulnerable characters.

He first drew critical praise for the play Eh?
Eh?
This article is about the play. For the common Canadian colloquialism, see Canadian English.Eh? is a play by Henry Livings.- Production history :...
for which he won a Theatre World Award
Theatre World Award
The Theatre World Award, first awarded for the 1945-46 season, is an American honor presented annually to actors and actresses in recognition of an outstanding New York City stage debut performance, either on Broadway or off-Broadway.-History:...
and a Drama Desk Award
Drama Desk Award
The Drama Desk Awards, which are given annually in a number of categories, are the only major New York theater honors for which productions on Broadway, Off-Broadway, Off-Off-Broadway compete against each other in the same category...
. This was soon followed by his breakthrough movie role as the good looking but troubled Benjamin Braddock in The Graduate
The Graduate
The Graduate is a 1967 American comedy-drama motion picture directed by Mike Nichols. It is based on the 1963 novel The Graduate by Charles Webb, who wrote it shortly after graduating from Williams College. The screenplay was by Buck Henry, who makes a cameo appearance as a hotel clerk, and Calder...
(1967).