Dusit is one of the 50 districts (Khet) of Bangkok
Bangkok
Bangkok is the capital and largest urban area city in Thailand. It is known in Thai as Krung Thep Maha Nakhon or simply Krung Thep , meaning "city of angels." The full name of Bangkok is Krung Thep Mahanakhon Amon Rattanakosin Mahintharayutthaya Mahadilok Phop Noppharat Ratchathani Burirom...
, Thailand
Thailand
Thailand , officially the Kingdom of Thailand , formerly known as Siam , is a country located at the centre of the Indochina peninsula and Southeast Asia. It is bordered to the north by Burma and Laos, to the east by Laos and Cambodia, to the south by the Gulf of Thailand and Malaysia, and to the...
.

The district forms the main administrative center of Thailand, as both the national parliament as well as the royal palace are located in this district, as well as several ministries. It is connected with the Rattanakosin island by the Ratchadamnoen road (literally 'Royal way for traveling').

The district was established by King Chulalongkorn
Chulalongkorn
Phra Bat Somdet Phra Poramintharamaha Chulalongkorn Phra Chunla Chom Klao Chao Yu Hua , or Rama V was the fifth monarch of Siam under the House of Chakri. He was known to the Siamese of his time as Phra Phuttha Chao Luang . He is considered one of the greatest kings of Siam...
, who wanted to escape the cluttered area of the Rattanakosin Island.

The Vimanmek Palace
Vimanmek Palace
The Vimanmek Palace officially named Vimanmek Mansion, is a former royal palace in Bangkok, Thailand. It is also known as the Vimanmek Teak Mansion or Vimanmek Mansion...
was constructed in 1900 completely out of teak
Teak
Teak is the common name for the tropical hardwood tree species Tectona grandis and its wood products. Tectona grandis is native to south and southeast Asia, mainly India, Indonesia, Malaysia, and Burma, but is naturalized and cultivated in many countries, including those in Africa and the...
, and was used as a royal palace for a short time, but was abandoned in 1908. Revived and reconstructed in 1992 it is now a major touristical attraction of the district.

Other important buildings in the district include the Ananta Samakhom Throne Hall, which was another former residence of King Chulalongkorn, and was later used as the first parliament building. It was built 1907-1915 by the Italian architects Annibale Rigotti and Mario Tamagno. Next to the building is the Suan Amporn park, and across the street the Dusit Zoo
Dusit Zoo
Dusit Zoo at Khao Din Park is a city zoo in Bangkok, Thailand.Located at Khao Din Park in Bangkok's Dusit District next to the Parliament House and Dusit Palace, it is the oldest zoo of Thailand, built by King Chulalongkorn as his private garden adjacent to the royal palace. After the King's...
. The vast space in front of Ananta Samakom Throne Hall is the Royal Plaza. At the middle of the plaza is the Equestrian Statue of King Chulalongkorn
Chulalongkorn
Phra Bat Somdet Phra Poramintharamaha Chulalongkorn Phra Chunla Chom Klao Chao Yu Hua , or Rama V was the fifth monarch of Siam under the House of Chakri. He was known to the Siamese of his time as Phra Phuttha Chao Luang . He is considered one of the greatest kings of Siam...
.

Various events are held in Suan Amporn park and Royal Plaza. Yearly events include commencements
Graduation
Graduation is the action of receiving or conferring an academic degree or the ceremony that is sometimes associated, where students become Graduates. Before the graduation, candidates are referred to as Graduands. The date of graduation is often called degree day. The graduation itself is also...
for many universities in Bangkok, and the Red Cross Fair which takes place for 9 days about the end of March till the first week of April.

The Bang Sue
Bang Sue
Bang Sue is one of the 50 districts of Bangkok, Thailand. Its neighbor, clockwise from east, are Chatuchak, Dusit and Bang Phlat, and Bang Kruai and Mueang Nonthaburi .-Places:...
station of Bangkok Metro
Bangkok Metro
The MRT , sometimes referred to as the Bangkok Metro, is Bangkok's underground metro system in Thailand. It was constructed under a concession concept...
is located just a short distance outside Dusit district at its extreme northeast corner in Bang Sue district. 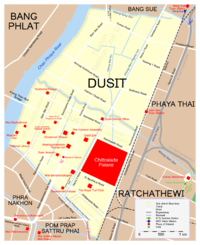 The district is sub-divided into 5 sub-districts (Khwaeng).