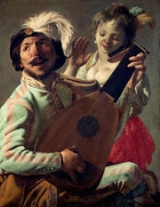 A duet is a musical composition
Musical composition
Musical composition can refer to an original piece of music, the structure of a musical piece, or the process of creating a new piece of music. People who practice composition are called composers.- Musical compositions :...
for two performer
Performing arts
The performing arts are those forms art which differ from the plastic arts insofar as the former uses the artist's own body, face, and presence as a medium, and the latter uses materials such as clay, metal or paint which can be molded or transformed to create some physical art object...
s. In classical music
Classical music
Classical music is the art music produced in, or rooted in, the traditions of Western liturgical and secular music, encompassing a broad period from roughly the 11th century to present times...
, the term is most often used for a composition for two singers
Singing
Singing is the act of producing musical sounds with the voice, and augments regular speech by the use of both tonality and rhythm. One who sings is called a singer or vocalist. Singers perform music known as songs that can be sung either with or without accompaniment by musical instruments...
or pianist
Pianist
A pianist is a musician who plays the piano. A professional pianist can perform solo pieces, play with an ensemble or orchestra, or accompany one or more singers, solo instrumentalists, or other performers.-Choice of genres:...
s; with other instruments, the word duo is also often used. A piece performed by two pianists performing together on the same piano is referred to as "piano duet" or "piano four hands". A piece for two pianists performing together on separate pianos is referred to as a "piano duo".

"Duet" is also used as a verb
Verb
A verb, from the Latin verbum meaning word, is a word that in syntax conveys an action , or a state of being . In the usual description of English, the basic form, with or without the particle to, is the infinitive...
for the act of performing a musical duet, or colloquially as a noun
Noun
In linguistics, a noun is a member of a large, open lexical category whose members can occur as the main word in the subject of a clause, the object of a verb, or the object of a preposition .Lexical categories are defined in terms of how their members combine with other kinds of...
to refer to the performers of a duet. The word is also occasionally used in reference to non-musical activities performed together by two people.

In Renaissance music
Renaissance music
Renaissance music is European music written during the Renaissance. Defining the beginning of the musical era is difficult, given that its defining characteristics were adopted only gradually; musicologists have placed its beginnings from as early as 1300 to as late as the 1470s.Literally meaning...
, a duet specifically intended as a teaching tool, to be performed by teacher and student, was called a bicinium
Bicinium
In music of the Renaissance and early Baroque eras, a bicinium was a composition for only two parts, especially one with a pedagogical purpose.The term has had two usages in music history:...
(see Étude
Étude
An étude , is an instrumental musical composition, most commonly of considerable difficulty, usually designed to provide practice material for perfecting a particular technical skill. The tradition of writing études emerged in the early 19th century with the rapidly growing popularity of the piano...
).
The source of this article is wikipedia, the free encyclopedia.  The text of this article is licensed under the GFDL.