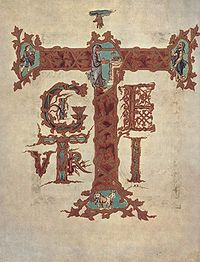 Drogo also known as Dreux or Drogon, was an illegitimate son of Frankish
Franks
The Franks were a confederation of Germanic tribes first attested in the third century AD as living north and east of the Lower Rhine River. From the third to fifth centuries some Franks raided Roman territory while other Franks joined the Roman troops in Gaul. Only the Salian Franks formed a...
emperor
Emperor
An emperor is a monarch, usually the sovereign ruler of an empire or another type of imperial realm. Empress, the female equivalent, may indicate an emperor's wife or a woman who rules in her own right...
Charlemagne
Charlemagne
Charlemagne was King of the Franks from 768 and Emperor of the Romans from 800 to his death in 814. He expanded the Frankish kingdom into an empire that incorporated much of Western and Central Europe. During his reign, he conquered Italy and was crowned by Pope Leo III on 25 December 800...
by the concubine Regina
Regina (concubine)
Regina was a concubine of Charlemagne who bore him two illegitimate sons, both of whom became clerical men. First, she gave birth to Drogo in 801, then to Hugh in 802. They would be the last-living sons of Charlemagne, though not the longest-living: Louis the Pious lived to the age of 62....
.

As one of the few children to outlive his father, Drogo's prospects for political power were very favourable. Only one older son of Charlemagne remained, and was eager to ensure his few opponents were placated. He became a cleric in 818, abbot
Abbot
The word abbot, meaning father, is a title given to the head of a monastery in various traditions, including Christianity. The office may also be given as an honorary title to a clergyman who is not actually the head of a monastery...
of Luxeuil in 820, acceded to become bishop of Metz in 823 and arch chapter in 834 in which position he remained for the duration of his life. His younger (full) brother, Hugh
Hugh, son of Charlemagne
Hugh was the illegitimate son of Charlemagne and his concubine Regina, with whom he had one other son: Bishop Drogo of Metz .Hugh was the abbot of several abbacies: Saint-Quentin , Lobbes , and Saint-Bertin...
, was also ordained. He remained extremely loyal to his (half) brother, Louis the Pious
Louis the Pious
Louis the Pious , also called the Fair, and the Debonaire, was the King of Aquitaine from 781. He was also King of the Franks and co-Emperor with his father, Charlemagne, from 813...
and amassed great power under him. Drogo's influence began to wane after Louis' death, and his influence fell even more after the death of his only full brother Hugh in 844. Still, he managed to ensure the production of the Drogo Sacramentary
Drogo Sacramentary
The Drogo Sacramentary is a Carolingian illuminated manuscript on vellum of c.850 AD, one of the monuments of Carolingian book illumination...
, which is named for him. He is interred at Abbey Church of St. Arnulf in Metz
Metz
Metz is a city in the northeast of France located at the confluence of the Moselle and the Seille rivers.Metz is the capital of the Lorraine region and prefecture of the Moselle department. Located near the tripoint along the junction of France, Germany, and Luxembourg, Metz forms a central place...
.

Information about Droga, bishop of Metz we can find e.g. in Annales Bertiniani: anno 839: Dominicae nativitatis festum hilariter, a Drogone fratre suo et Metensis urbis episcopo decentissime susceptus, in eadem civitate caelebravit
The source of this article is wikipedia, the free encyclopedia.  The text of this article is licensed under the GFDL.