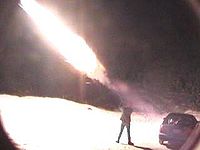 A Dragon's Breath usually refers to a zirconium
Zirconium
Zirconium is a chemical element with the symbol Zr and atomic number 40. The name of zirconium is taken from the mineral zircon. Its atomic mass is 91.224. It is a lustrous, grey-white, strong transition metal that resembles titanium...
-based pyrotechnic
Pyrotechnics
Pyrotechnics is the science of using materials capable of undergoing self-contained and self-sustained exothermic chemical reactions for the production of heat, light, gas, smoke and/or sound...
shotgun
Shotgun
A shotgun is a firearm that is usually designed to be fired from the shoulder, which uses the energy of a fixed shell to fire a number of small spherical pellets called shot, or a solid projectile called a slug...
round. When the round is fired, sparks and occasionally flames shoot out to about 15 m (48 feet), beyond 15 metres, the round's already limited effectiveness is drastically reduced.

While its tactical uses are very limited, the visual effect it produces is impressive, similar to that of a short-ranged flamethrower
Flamethrower
A flamethrower is a mechanical device designed to project a long controllable stream of fire.Some flamethrowers project a stream of ignited flammable liquid; some project a long gas flame. Most military flamethrowers use liquids, but commercial flamethrowers tend to use high-pressure propane and...
. The rounds are often used as a distress signal, similar to an emergency flare gun. They can also be used as means of intimidation to the opposing forces. The pyrotechnic shell is expensive compared to other shells, costing around 5 US dollars per shell.

Because it is a very low-power round, it cannot be used in an automatic shotgun
Automatic shotgun
An automatic shotgun is a form of shotgun that is able to fire cartridges continuously while the trigger is pressed, unlike semi-automatic weapons which require the user to depress the trigger for each projectile fired.- Design :...
; it does not produce enough recoil energy to cycle the next shot, causing the mechanism to jam. An additional reason for use only in a manually-operated firearm is the fact that the round shoots at least a little flame for 3–5 seconds. This would cause a hazard if a shell still emitting flame were to be ejected from an automatic shotgun.

Dragon's Breath rounds are banned in many locations, due to their inherent fire hazard. Even in areas where the round may be shipped, an extra fee for hazardous materials may be charged.

The law
Law
Law is a system of rules and guidelines which are enforced through social institutions to govern behavior, wherever possible. It shapes politics, economics and society in numerous ways and serves as a social mediator of relations between people. Contract law regulates everything from buying a bus...
in the State of Illinois states that a Dragon's Breath round is any round that "contains exothermic
Exothermic
In thermodynamics, the term exothermic describes a process or reaction that releases energy from the system, usually in the form of heat, but also in the form of light , electricity , or sound...
pyrophoric misch metal as the projectile and is designed for the purpose of throwing or spewing a flame or fireball to simulate a flame-thrower". This shotgun round is banned for use by anyone who is not authorized to possess, manufacture, or sell by the law." The wording is very similar for Florida
Florida
Florida is a state in the southeastern United States, located on the nation's Atlantic and Gulf coasts. It is bordered to the west by the Gulf of Mexico, to the north by Alabama and Georgia and to the east by the Atlantic Ocean. With a population of 18,801,310 as measured by the 2010 census, it...
as well.
The source of this article is wikipedia, the free encyclopedia.  The text of this article is licensed under the GFDL.