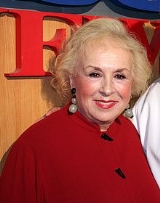 Overview
Doris Roberts is an American character actress of film, stage and television. She has received five Emmy Awards. She began her career in 1952, and may be best-known as Marie Barone on Everybody Loves Raymond
Everybody Loves Raymond
Everybody Loves Raymond is an American television sitcom that originally ran on CBS from September 13, 1996, to May 16, 2005. Many of the situations from the show are based on the real-life experiences of lead actor Ray Romano, creator/producer Phil Rosenthal and the show's writing staff...
from 1996–2005.
Doris Roberts was born in St. Louis, Missouri
St. Louis, Missouri
St. Louis is an independent city on the eastern border of Missouri, United States. With a population of 319,294, it was the 58th-largest U.S. city at the 2010 U.S. Census. The Greater St...
. Her mother, Ann Meltzer, raised Roberts in the Jewish
Judaism
Judaism ) is the "religion, philosophy, and way of life" of the Jewish people...
faith in the New York City
New York City
New York is the most populous city in the United States and the center of the New York Metropolitan Area, one of the most populous metropolitan areas in the world. New York exerts a significant impact upon global commerce, finance, media, art, fashion, research, technology, education, and...
borough of The Bronx
The Bronx
The Bronx is the northernmost of the five boroughs of New York City. It is also known as Bronx County, the last of the 62 counties of New York State to be incorporated...
with the assistance of her own parents, after her husband, whose name may have been Larry Meltzer or Larry Green, deserted the family.

Can someone please contact ms roberts and ask her to speak to the powers that be to try to create a womens' fashion and beauty magazine for senio...
More
x