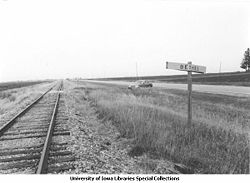 Doris and Bethel are twin town sites in Buchanan County
Buchanan County, Iowa
-2010 census:The 2010 census recorded a population of 20,958 in the county, with a population density of . There were 8,968 housing units, of which 8,161 were occupied.-2000 census:...
, Iowa
Iowa
Iowa is a state located in the Midwestern United States, an area often referred to as the "American Heartland". It derives its name from the Ioway people, one of the many American Indian tribes that occupied the state at the time of European exploration. Iowa was a part of the French colony of New...
, United States
United States
The United States of America is a federal constitutional republic comprising fifty states and a federal district...
, both located just north of Highway 939 in central Buchanan County near Independence
Independence, Iowa
Independence is a city in and the county seat of Buchanan County, Iowa, United States. The population was 5,966 in the 2010 census, a decline from 6,014 in the 2000 census...
. Founded as whistle-stops along the Chicago and North Western Railway
Chicago and North Western Railway
The Chicago and North Western Transportation Company was a Class I railroad in the Midwest United States. It was also known as the North Western. The railroad operated more than of track as of the turn of the 20th century, and over of track in seven states before retrenchment in the late 1970s...
, the sites are abandoned today.

Galbraith's Rail Map of Iowa from 1897 shows no towns located between Independence and Winthrop
Winthrop, Iowa
Winthrop is a city in Buchanan County, Iowa, United States. The population was 772 at the 2000 census.-Geography:Winthrop is located at .According to the United States Census Bureau, the city has a total area of , all of it land....
. However, by the early 1900s, a number of Iowa newspapers were reporting on events occurring in Doris. A lot sale for plots of land in Doris was held by James Duffy in September 1902; a railroad station and stockyards had recently been completed. Farming activities in Doris were reported as late as 1939, but with increasing infrequency.

In 1917 the Waterloo Times-Tribune reported a story about two men fleeing from the law in Independence; the thieves were apprehended in Doris.

Doris was the site of a freight train
Freight train
A freight train or goods train is a group of freight cars or goods wagons hauled by one or more locomotives on a railway, ultimately transporting cargo between two points as part of the logistics chain...
collision on September 30, 1922, when a train leaving from Masonville rear ended another train at the Doris siding. The accident resulted in the death of one conductor and the injury of two others, and the derailment of both trains.

The town sites were located three fourths of a mile apart, Doris at the junction of Highway 939 and North Doris Avenue, an unimproved and unpaved gravel road located between Winthrop
Winthrop, Iowa
Winthrop is a city in Buchanan County, Iowa, United States. The population was 772 at the 2000 census.-Geography:Winthrop is located at .According to the United States Census Bureau, the city has a total area of , all of it land....
and Independence. Bethel was less than a mile west, near the intersection of 939 and Nathan Bethel Avenue. Both towns were populated during the early 20th century, but with the advent of rural migration
Urbanization
Urbanization, urbanisation or urban drift is the physical growth of urban areas as a result of global change. The United Nations projected that half of the world's population would live in urban areas at the end of 2008....
to larger communities, the sites gradually emptied. By the 1990s, Bethel had lost all but a few scattered farmhouses. The town site at Doris is completely abandoned, and all the buildings there have long since been razed to make way for fields. Only a few scattered farms exist in the area.
The source of this article is wikipedia, the free encyclopedia.  The text of this article is licensed under the GFDL.