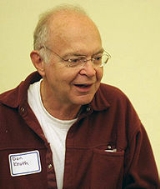 He is the author of the seminal multi-volume work The Art of Computer Programming
The Art of Computer Programming
The Art of Computer Programming is a comprehensive monograph written by Donald Knuth that covers many kinds of programming algorithms and their analysis....
. Knuth has been called the "father" of the analysis of algorithms
Analysis of algorithms
To analyze an algorithm is to determine the amount of resources necessary to execute it. Most algorithms are designed to work with inputs of arbitrary length...
. He contributed to the development of the rigorous analysis of the computational complexity of algorithms and systematized formal mathematical techniques for it. In the process he also popularized the asymptotic notation
Big O notation
In mathematics, big O notation is used to describe the limiting behavior of a function when the argument tends towards a particular value or infinity, usually in terms of simpler functions. It is a member of a larger family of notations that is called Landau notation, Bachmann-Landau notation, or...
.

In addition to fundamental contributions in several branches of theoretical computer science
Theoretical computer science
Theoretical computer science is a division or subset of general computer science and mathematics which focuses on more abstract or mathematical aspects of computing....
, Knuth is the creator of the TeX
TeX
TeX is a typesetting system designed and mostly written by Donald Knuth and released in 1978. Within the typesetting system, its name is formatted as ....
computer typesetting system, the related METAFONT
METAFONT
Metafont is a programming language used to define vector fonts. It is also the name of the interpreter that executes Metafont code, generating the bitmap fonts that can be embedded into e.g. PostScript...
font definition language and rendering system, and the Computer Modern
Computer Modern
Computer Modern is the family of typefaces used by default by the typesetting program TeX. It was created by Donald Knuth with his METAFONT program, and was most recently updated in 1992. However, the family font was superseded by CM-Super , the latest release dating 2008...
family of typefaces.

As a writer and scholar, Knuth created the WEB
WEB
WEB is a computer programming system created by Donald E. Knuth as the first implementation of what he called "literate programming": the idea that one could create software as works of literature, by embedding source code inside descriptive text, rather than the reverse , in an order that is...
/CWEB
CWEB
CWEB is a computer programming system created by Donald Knuth and Silvio Levy as a follow up to Knuth's WEB literate programming system, using the C programming language instead of Pascal....
computer programming systems designed to encourage and facilitate literate programming
Literate programming
Literate programming is an approach to programming introduced by Donald Knuth as an alternative to the structured programming paradigm of the 1970s....
, and designed the MIX
MIX
MIX is a hypothetical computer used in Donald Knuth's monograph, The Art of Computer Programming . MIX's model number is 1009, which was derived by combining the model numbers and names of several contemporaneous, commercial machines deemed significant by the author...
/MMIX
MMIX
MMIX is a 64-bit RISC instruction set architecture designed by Donald Knuth, with significant contributions by John L. Hennessy and Richard L. Sites...
instruction set architectures
Instruction set
An instruction set, or instruction set architecture , is the part of the computer architecture related to programming, including the native data types, instructions, registers, addressing modes, memory architecture, interrupt and exception handling, and external I/O...
.
Knuth was born in Milwaukee, Wisconsin
Wisconsin
Wisconsin is a U.S. state located in the north-central United States and is part of the Midwest. It is bordered by Minnesota to the west, Iowa to the southwest, Illinois to the south, Lake Michigan to the east, Michigan to the northeast, and Lake Superior to the north. Wisconsin's capital is...
, where his father owned a small printing business and taught bookkeeping at Milwaukee Lutheran High School
Milwaukee Lutheran High School
Milwaukee Lutheran High School is a secondary school located in Milwaukee, Wisconsin. The school was originally known as Lutheran High School . LHS was established in 1903, making Milwaukee Lutheran an offshoot of the oldest Lutheran high school in America...
, where he enrolled, earning achievement awards.

To begin this query, a short prefix about the historical precedence, and why Donald Knuth may be a capable scholar to field the inquiry. 1. Like nu...
More

The whole thing that makes a mathematician’s life worthwhile is that he gets the grudging admiration of three or four colleagues.

A mathematical formula should never be "owned" by anybody! Mathematics belong to God.

I define UNIX as 30 definitions of regular expressions living under one roof.

I can&rsquo;t go to a restaurant and order food because I keep looking at the fonts on the menu.