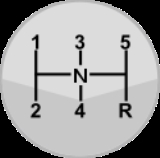 Dog leg layout gearboxes are desirable on performance automobiles because in road racing more frequent shifting occurs from second to third than from first to second gear.

Examples of cars that utilized this pattern for performance reasons include the BMW M535, Early 635CSi (Non-US) and (Non-US) M3 E30, BMW 2002 Tii and Turbo, Mercedes-Benz 190E 2.3-16 and 2.5-16, Ferrari 308 GTB/GTS, Ferrari Testarossa
Ferrari Testarossa
The Ferrari Testarossa is a 12-cylinder mid-engine sports car manufactured by Ferrari, which went into production in 1984 as the successor to the Ferrari Berlinetta Boxer...
, Porsche 914
Porsche 914
The Porsche 914 or VW-Porsche 914 is a mid-engined, targa-topped two-seat roadster designed, manufactured and marketed collaboratively by Volkswagen and Porsche from 1969 to 1976.- Development :...
, early 911
Porsche 911
The Porsche 911 is a luxury 2-door sports coupe made by Porsche AG of Stuttgart, Germany. It has a distinctive design, rear-engined and with independent rear suspension, an evolution of the swing axle on the Porsche 356. The engine was also air-cooled until the introduction of the Type 996 in 1998...
, 924 Turbo
Porsche 924
The Porsche 924 is an automobile produced by Porsche AG of Germany from 1976 to 1988. A two-door, 2+2 coupé, the 924 replaced the 914 as the company's entry-level model, and was the model that finally retired the 912. In production terms, the 924 was the first Porsche model powered by a...
(all featuring Getrag
Getrag
Getrag is a leading manufacturer of automobile manual transmissions. The company was founded on 1 May 1935, in Ludwigsburg, Germany, by Hermann Hagenmeyer; as the Getriebe und Zahnradfabrik Hermann Hagenmeyer GmbH & Cie KG...
gearboxes), Cosworth Vega, Porsche 928
Porsche 928
The Porsche 928 was a sports-GT car sold by Porsche AG of Germany from 1978 to 1995. Originally intended to replace the company's iconic 911, the 928 attempted to combine the power, poise, and handling of a sports car with the refinement, comfort, and equipment of a luxury sedan to create what some...
, Talbot Sunbeam Lotus, Vauxhall Firenza
Vauxhall Firenza
The Firenza is a model of car offered by Vauxhall Motors from May 1971 till 1975. It was a development of the Viva, but had a distinctive coupé body style and only two doors....
HPF the Lamborghini Miura
Lamborghini Miura
The Lamborghini Miura was a sports car produced by Italian automaker Lamborghini between 1966 and 1972. The car is widely considered to have begun the trend of high performance, two-seater, mid-engined sports cars...
, the Maserati Biturbo and the De Tomaso Pantera
De Tomaso Pantera
The Pantera was a sports car produced by the De Tomaso car company of Italy from 1971 to 1991, the last one being delivered to a customer in 1992.The word "Pantera" is Italian for "Panther".-History:...
.

Many light trucks have dog-leg 5 or 6 speed transmissions, due to the fact that second gear is fine for taking off normally, first is considered a crawler gear in these trucks and is only ever used for taking off with heavy loads and/or a trailer, or going down very steep grades.