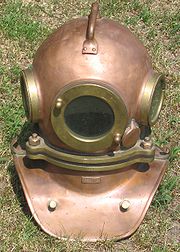 Diving helmets are worn mainly by professional divers engaged in surface supplied diving
Surface supplied diving
Surface supplied diving refers to divers using equipment supplied with breathing gas using a diver's umbilical from the surface, either from the shore or from a diving support vessel sometimes indirectly via a diving bell...
, though many models can be adapted for use with scuba equipment
Scuba set
A scuba set is an independent breathing set that provides a scuba diver with the breathing gas necessary to breathe underwater during scuba diving. It is much used for sport diving and some sorts of work diving....
.

The helmet seals the whole of the diver's head from the water, allows the diver to see clearly underwater, provides the diver with breathing gas
Breathing gas
Breathing gas is a mixture of gaseous chemical elements and compounds used for respiration.Air is the most common and only natural breathing gas...
, protects the diver's head when doing heavy or dangerous work, and usually provides voice communications with the surface (and possibly other divers). If a helmeted diver becomes unconscious
Unconsciousness
Unconsciousness is the condition of being not conscious—in a mental state that involves complete or near-complete lack of responsiveness to people and other environmental stimuli. Being in a comatose state or coma is a type of unconsciousness. Fainting due to a drop in blood pressure and a...
but is still breathing, the helmet will remain in place and continue to deliver breathing gas until the diver can be rescued
Diver rescue
thumb|right|Beaching a casualty while providing artificial respirationDiver rescue, following an accident, is the process of avoiding or limiting further exposure to diving hazards and bringing a SCUBA diver to safety...
. In contrast, the scuba regulator
Diving regulator
A diving regulator is a pressure regulator used in scuba or surface supplied diving equipment that reduces pressurized breathing gas to ambient pressure and delivers it to the diver. The gas may be air or one of a variety of specially blended breathing gases...
typically used by recreational divers
Recreational diving
Recreational diving or sport diving is a type of diving that uses SCUBA equipment for the purpose of leisure and enjoyment. In some diving circles, the term "recreational diving" is used in contradistinction to "technical diving", a more demanding aspect of the sport which requires greater levels...
must be held in the mouth, otherwise it will usually fall out of an unconscious diver's mouth and result in drowning
Drowning
Drowning is death from asphyxia due to suffocation caused by water entering the lungs and preventing the absorption of oxygen leading to cerebral hypoxia....
.

Before the invention of the demand regulator, all diving helmets used a free-flow design. Gas was delivered at a constant rate, regardless of the diver's breathing, and flowed out through an exhaust valve. Most modern helmets incorporate a demand valve so the helmet only delivers breathing gas when the diver inhales. Free-flow helmets use much larger quantities of gas than demand helmets, which can cause logistical difficulties and is very expensive when special breathing gases (such as heliox
Heliox
Heliox is a breathing gas composed of a mixture of helium and oxygen .Heliox has been used medically since the 1930s, and although the medical community adopted it initially to alleviate symptoms of upper airway obstruction, its range of medical uses has since expanded greatly, mostly because of...
) are used. They also produce a constant noise inside the helmet, which can cause communication difficulties. Free-flow helmets are still preferred for hazardous materials diving, because their positive-pressure nature can prevent the ingress of hazardous material in case the integrity of the suit
Diving suit
A diving suit is a garment or device designed to protect a diver from the underwater environment. A diving suit typically also incorporates an air-supply .-History:...
or helmet is compromised. They also remain relatively common in shallow-water air diving, where gas consumption is of little concern, and in nuclear diving because they must be disposed of after some period of use due to irradiation; free-flow helmets are significantly less expensive to purchase and maintain than demand types.

Most modern helmet designs are sealed at the neck using a neoprene "neck dam" which is independent of the suit, allowing the diver his choice of suits depending on the dive conditions. When a neck dam is installed into a drysuit, however, the entire body is isolated from the surrounding liquid, giving an additional degree of warmth and protection. When divers must work in hazardous environments such as sewage or dangerous chemicals, a helmet (usually of the free-flow type or using a series exhaust valve system) is sealed to a special drysuit (commonly made of a fabric with a smooth vulcanised rubber outer surface) to completely isolate and protect the diver. This equipment is the modern equivalent of the historic Mark V "Standard Diving Dress
Standard diving dress
A standard diving dress consists of a metallic diving helmet, an airline or hose from a surface supplied diving air pump, a canvas diving suit, diving knife and boots...
".

Historically, deep sea diving helmets ranged from the no bolt to two bolt to four bolt helmets; helmets with six, eight, or 12 bolts; and Two-Three, Twelve-Four, and Twelve-Six bolt helmets. Bolts being the method of securing the helmet to the diving suit. The helmet could also be secured to the breastplate (corselet) by bolts as in the case of US twelve-four helmets (12 bolts to the suit, four bolts seal helmet to corselet). The no bolt helmet used a spring-loaded clamp to secure the helmet to corselet over the suit. Swedish helmets were distinctive for using a neck ring instead of a corselet, a pioneer of modern diving euipment but hugely cumbersome and uncomfortable for the diver. This equipment is commonly referred to as "heavy gear."

Notable modern commercial helmets include the Kirby Morgan Superlite-17 from 1975 and developments from that model. These helmets are of the demand type, built on a fiberglass shell with chrome-plated brass fittings, and are considered the standard in modern commercial diving for most operations.

Kirby Morgan dominates the new helmet market, but there have been other notable manufacturers including Savoie, Miller, and Swindell. Many of these are still in use; a new helmet represents an investment of several thousand dollars, and most divers purchase their own or rent one from their employer.

Oceaneering bought out the Ratcliffe helmet, often known by its nickname "Rat Hat". It can function in either free-flow or demand mode.

Reclaim helmets use a surface supply system to provide breathing gas to the diver in the same way as in the open circuit helmets, but also have a return system to reclaim and recycle the exhaled gas to save the expensive helium diluent, which would be discharged to the surrounding water and lost in an open circuit system. The reclaimed gas is returned to the surface through a hose in the umbilical which is provided for this purpose, passed through a scrubber to remove carbon dioxide, and can then be repressurised and blended with oxygen to the required mix before storage for later use.

In order to allow the exhaust gas to be discharged from the helmet safely, it must pass through an exhaust regulator, which works on a similar principle to the demand valve for supply gas, but is activated by the pressure difference between the interior of the helmet and the ambient pressure.

The Desco "air hat" is a metal free-flow helmet, designed in 1968 and still in production. Although it has been updated several times, the basic design has remained constant and all upgrades can be retrofitted to older helmets. Its robust and simple design (it can be completely disassembled in the field with only a screwdriver and wrench) makes it popular for shallow-water operations and hazardous materials diving. The Desco is secured to the diver by means of a "jock strap" which runs between the legs, and its buoyancy can be fine-tuned by adjusting intake and exhaust valves.

Light-weight transparent dome type helmets have also been used. For example the Sea Trek surface supplied system, developed in 1998 by Sub Sea Systems, is used for recreational diving. Also the Lama, developed by Yves Le Masson in the 1970s, has been used in television
Television
Television is a telecommunication medium for transmitting and receiving moving images that can be monochrome or colored, with accompanying sound...
to let viewers see the face and hear the voice of the presenter speaking underwater.

Augustus Siebe
Augustus Siebe
Augustus Siebe was a German-born British engineer chiefly known for his contributions to diving equipment.- Contribution to diving :...
is known as the father of Diving. In the year 1837 German-born inventor Augustus Siebe, then living in England, developed a Diving Helmet which was sealed to a watertight, air-containing rubber suit. The closed diving suit, connected to an air pump on the surface, becomes the first effective standard diving dress, and the prototype of hard-hat rigs still in use today. In his obituary Siebe is described as the father of diving.

Siebe Gorman
Siebe Gorman
Siebe Gorman & Company Ltd was a British company which developed diving equipment and breathing equipment and worked on commercial diving and marine salvage projects...
& Co was notable for developing the “closed” diving helmet of the standard diving dress and associated equipment. As the helmet was sealed to the diving suit, it was watertight, unlike the previous “open” helmet systems--which would flood if inverted. The new equipment was safer and more efficient, and revolutionised underwater work from the 1830s.

However, Alexander McKee
Alexander McKee (author)
Alexander McKee was a British military historian and amateur diver. He served in the army in World War II and wrote articles for army newspapers and became writer/producer for the British Forces Network...
proposed that brothers John
John Deane (inventor)
Charles and John Deane were the inventors of the diving helmet, and performed diving operations at the wreck of the Mary Rose. The brothers received their education at The Royal Hospital School, Greenwich, and were both in attendance in 1812...
and Charles Deane
Charles Anthony Deane
Charles Anthony Deane was a pioneering diving engineer.Born in Deptford, Charles and his brother John and studied at the Greenwich Hospital School for Boys to become merchant seamen, going to sea at the age of 14 for a period of 7 years before returning to Deptford.Charles Deane then took up...
were the true inventors, and that Siebe was the leading manufacturer of their designs. This is also confirmed by the fact that Siebe's patents post dated the Deane brothers own and other emulators such as the Sadler company.

Commercial diver and inventor Joe Savoie is credited with inventing the neck dam in the 1960s, which made possible a new era of lightweight helmets, including the Kirby Morgan Superlite series (an adaption of Morgan's existing "Band Mask" into a full helmet.) Savoie chose not to patent his invention because of his desire to improve diver safety.

"Diving helmet" sometimes means a hard safety helmet like a workman's helmet
Hard hat
A hard hat is a type of helmet predominantly used in workplace environments, such as construction sites, to protect the head from injury by falling objects, impact with other objects, debris, bad weather and electric shock. Inside the helmet is a suspension that spreads the helmet's weight over the...
that covers the top and back of the head, but is not sealed. These may be worn with a full-face mask to provide impact protection.

During the First World War the British Army
British Army
The British Army is the land warfare branch of Her Majesty's Armed Forces in the United Kingdom. It came into being with the unification of the Kingdom of England and Scotland into the Kingdom of Great Britain in 1707. The new British Army incorporated Regiments that had already existed in England...
used a few diving helmets out of water as emergency protection from mustard gas.