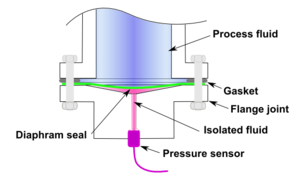 A diaphragm seal is a flexible membrane that seals and isolates an enclosure. The flexible nature of this seal
Seal (mechanical)
A mechanical seal is a device which helps join systems or mechanisms together by preventing leakage , containing pressure, or excluding contamination...
allows pressure
Pressure
Pressure is the force per unit area applied in a direction perpendicular to the surface of an object. Gauge pressure is the pressure relative to the local atmospheric or ambient pressure.- Definition :...
effects to cross the barrier but not the material being contained.

Common uses for diaphragm seals are to protect pressure sensor
Pressure sensor
A pressure sensor measures pressure, typically of gases or liquids. Pressure is an expression of the force required to stop a fluid from expanding, and is usually stated in terms of force per unit area. A pressure sensor usually acts as a transducer; it generates a signal as a function of the...
s from the fluid
Fluid
In physics, a fluid is a substance that continually deforms under an applied shear stress. Fluids are a subset of the phases of matter and include liquids, gases, plasmas and, to some extent, plastic solids....
whose pressure is being measured.

Since diaphragm seals need to be highly flexible, elastomers are commonly used, and include a wide variety of both general purpose and speciality rubbers. Elastomers are limited to low pressure applications and those that are chemically compatible with the various plastics and rubbers used.

Diaphragm seals (also known as chemical seals or gauge guards) are also used to protect a process fluid from the pressure sensor. Examples of this use are: 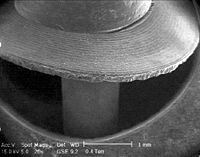 Diaphragm seals are susceptible to failure via several mechanisms, including cracking
Cracking
Cracking may refer to:* Cracking, the formation of a fracture or partial fracture in a solid material* Fluid catalytic cracking, a catalytic process widely used in oil refineries for cracking large hydrocarbon molecules into smaller molecules...
. Ozone cracking
Ozone cracking
Cracks can be formed in many different elastomers by ozone attack, and the characteristic form of attack of vulnerable rubbers is known as ozone cracking...
can occur in many elastomers for example used in pneumatic systems. If the gas contaminates the air supply, then many rubber diaphragms are at risk from the problem.