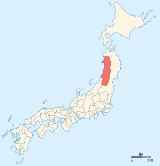 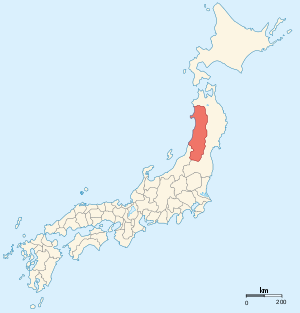 is an old province of Japan, comprising modern-day Yamagata Prefecture
Yamagata Prefecture
-Fruit:Yamagata Prefecture is the largest producer of cherries and pears in Japan. A large quantity of other kinds of fruits such as grapes, apples, peaches, melons, persimmons and watermelons are also produced.- Demographics :...
and Akita Prefecture
Akita Prefecture
is a prefecture of Japan located in the Tōhoku Region of northern Honshu, the main island of Japan. The capital is the city of Akita.- History :The area of Akita has been created from the ancient provinces of Dewa and Mutsu....
, except for the city of Kazuno and the town of Kosaka
Kosaka, Akita
is a town located in Kazuno District, Akita, Japan.As of 2011, the town has an estimated population of 6,046 and a density of 29.9 persons per km². The total area is 178.00 km²....
. It was sometimes called .

In 708 CE, the land of Dewa-no kuni was administratively separated from Echigo
Echigo Province
was an old province in north-central Japan, on the shores of the Sea of Japan. It was sometimes called , with Echizen and Etchū Provinces. Today the area is part of Niigata Prefecture, which also includes the island which was the old Sado Province. This province was the northernmost part of the...
; and the ambit of the province was gradually extended to the north as the Japanese pushed back the indigenous people of northern Honshū
Honshu
is the largest island of Japan. The nation's main island, it is south of Hokkaido across the Tsugaru Strait, north of Shikoku across the Inland Sea, and northeast of Kyushu across the Kanmon Strait...
.

In 1335, Shiba Kaneyori received the Dewa Province as a fief from Ashikaga Takauji
Ashikaga Takauji
was the founder and first shogun of the Ashikaga shogunate. His rule began in 1338, beginning the Muromachi period of Japan, and ended with his death in 1358...
.

In the Sengoku Period
Sengoku period
The or Warring States period in Japanese history was a time of social upheaval, political intrigue, and nearly constant military conflict that lasted roughly from the middle of the 15th century to the beginning of the 17th century. The name "Sengoku" was adopted by Japanese historians in reference...
, the southern region around Yamagata was held by the Mogami clan
Mogami clan
The were Japanese daimyo, and were a branch of the Ashikaga family. In the Sengoku period, it was the Sengoku Daimyo which ruled Dewa Province which is now Yamagata Prefecture and Akita Prefecture ....
and the northern part by the Akita clan
Akita clan
For the feudal domain also known as Akita, see Kubota DomainThe ' was a Japanese samurai clan of northern Honshū that claimed descent from Abe no Sadato. The Akita clan was originally known as the...
, both of which fought for Tokugawa Ieyasu
Tokugawa Ieyasu
was the founder and first shogun of the Tokugawa shogunate of Japan , which ruled from the Battle of Sekigahara  in 1600 until the Meiji Restoration in 1868. Ieyasu seized power in 1600, received appointment as shogun in 1603, abdicated from office in 1605, but...
at the Battle of Sekigahara
Battle of Sekigahara
The , popularly known as the , was a decisive battle on October 21, 1600 which cleared the path to the Shogunate for Tokugawa Ieyasu...
.