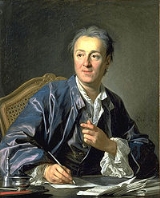 Overview
Denis Diderot was a French
French people
The French are a nation that share a common French culture and speak the French language as a mother tongue. Historically, the French population are descended from peoples of Celtic, Latin and Germanic origin, and are today a mixture of several ethnic groups...
philosopher, art critic
Art critic
An art critic is a person who specializes in evaluating art. Their written critiques, or reviews, are published in newspapers, magazines, books and on web sites...
, and writer. He was a prominent person during the Enlightenment and is best known for serving as co-founder and chief editor of and contributor to the Encyclopédie
Encyclopédie
Encyclopédie, ou dictionnaire raisonné des sciences, des arts et des métiers was a general encyclopedia published in France between 1751 and 1772, with later supplements, revised editions, and translations. It was edited by Denis Diderot and Jean le Rond d'Alembert...
.

Diderot also contributed to literature, notably with Jacques le fataliste et son maître (Jacques the Fatalist and his Master), which emulated Laurence Sterne
Laurence Sterne
Laurence Sterne was an Irish novelist and an Anglican clergyman. He is best known for his novels The Life and Opinions of Tristram Shandy, Gentleman, and A Sentimental Journey Through France and Italy; but he also published many sermons, wrote memoirs, and was involved in local politics...
in challenging conventions regarding novels and their structure and content, while also examining philosophical ideas about free will
Free will
"To make my own decisions whether I am successful or not due to uncontrollable forces" -Troy MorrisonA pragmatic definition of free willFree will is the ability of agents to make choices free from certain kinds of constraints. The existence of free will and its exact nature and definition have long...
.

From fanaticism to barbarism is only one step.

If you want me to believe in God, you must make me touch him.

What is this world of ours? A complex entity subject to sudden changes which all indicate a tendency to destruction; a swift succession of beings which follow one another, assert themselves and disappear; a fleeting symmetry; a momentary order.

Only a very bad theologian would confuse the certainty that follows revelation with the truths that are revealed. They are entirely different things.

There's a bit of testicle at the bottom of our most sublime feelings and our purest tenderness.

There is no kind of harassment that a man may not inflict on a woman with impunity in civilized societies.

Impenetrable in their dissimulation, cruel in their vengeance, tenacious in their purposes, unscrupulous as to their methods, animated by profound and hidden hatred for the tyranny of man — it is as though there exists among them an ever-present conspiracy toward domination, a sort of alliance like that subsisting among the priests of every country.

The arbitrary rule of a just and enlightened prince is always bad. His virtues are the most dangerous and the surest form of seduction: they lull a people imperceptibly into the habit of loving, respecting, and serving his successor, whoever that successor may be, no matter how wicked or stupid.